Home » Science » Scientists May Have Found the Key to Curing Autism, Cancer and HIV: New Research 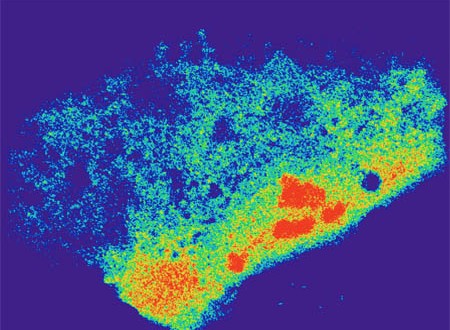 Researchers May Have Found the Key to Curing Autism, Cancer and HIV

Scientists May Have Found the Key to Curing Autism, Cancer and HIV: New Research

Scientists at the University of California, San Diego say they are the first to target RNA in living cells using the ever-popular gene-editing technique CRISPR-Cas9.

“This work is the first example, to our knowledge, of targeting RNA in living cells with CRISPR-Cas9,” said senior author Gene Yeo, PhD, associate professor of cellular and molecular medicine. “Our current work focuses on tracking the movement of RNA inside the cell, but future developments could enable researchers to measure other RNA features or advance therapeutic approaches to correct disease-causing RNA behaviors.”

RNA’s location in a cell – and how and when it gets there – can influence whether proteins are produced in the right location and at the appropriate time. For instance, proteins important to neuronal connections in the brain, known as synapses, are produced from RNAs located at these contacts. Defective RNA transport is linked to a host of conditions ranging from autism to cancer and researchers need ways to measure RNA movement in order to develop treatments for these conditions.

Efforts to edit and measure DNA – as a means to alter protein production, study the underlying biology and correct defects to treat disease – got a big boost a few years ago. That’s when researchers discovered they could take CRISPR-Cas9, a naturally occurring defense mechanism bacteria use to fend off invading bacteria, and apply it to edit genes in mammalian systems.

Normally, CRISPR-Cas9 works like this: researchers design a “guide” RNA to match the sequence of a specific target gene. The RNA directs the Cas9 enzyme to the desired spot in the genome, where it cuts the DNA. The cell repairs the DNA break imprecisely, thus inactivating the gene, or researchers replace the section adjacent to the cut with a corrected version of the gene.

Until now, CRISPR-Cas9 could only be used to manipulate DNA. Yeo and colleagues at the University of California, Berkeley, have applied the technique to develop a flexible means of targeting RNA in live cells, also called RNA-targeted Cas9 (RCas9).

In order to target RNA instead of DNA, the researchers altered several features of the CRISPR-Cas9 system. Building upon previous work by co-author Jennifer Doudna, PhD, at UC Berkeley, they designed a short nucleic acid called the PAMmer that, along with the guide RNA, directs Cas9 to an RNA molecule.

To test the system, Yeo’s team targeted the RNA that encodes the proteins ACTB, TFRC and CCNA2. Then they watched as Cas9, fused with a fluorescent protein, revealed the movement of RNA into stress granules, a cluster of proteins and RNAs that form in a cell’s cytosol (the area outside the nucleus) when the cell is under stress. Stress granules are linked to neurodegenerative disorders, such as amyotrophic lateral sclerosis (ALS). This system allowed the team to track RNA over time, in live cells, without the need for artificial tags commonly used in other RNA-tracking techniques – an approach that can interfere with normal cellular processes.

“CRISPR-Cas9 is supporting a revolution in genomics and medicine based on its ability to target and modify human DNA,” said David Nelles, a UC San Diego Jacobs School of Engineering graduate student in Yeo’s lab and first author of the study. “DNA is the fundamental building block of life and we are just beginning to see the implications of genome engineering with CRISPR-Cas9, but many diseases including cancer and autism are linked to problems with another fundamental biological molecule – RNA.”

Web articles – via partners/network co-ordinators. This website and its contents are the exclusive property of ANGA Media Corporation . We appreciate your feedback and respond to every request. Please fill in the form or send us email to: [email protected]
Previous: Austin Reed Edenfield: Former Ole Miss Student Pleads Guilty for Noose Incident
Next: Doomsday Vault holds key to surviving post-apocalyptic world “Photo”