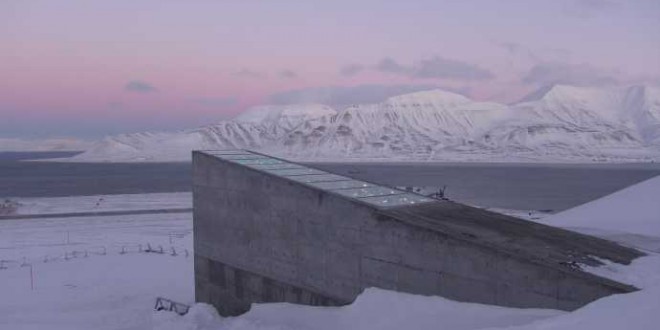 Researchers created the Doomsday Vault in 2008 to preserve potential crops in the event of a global natural disaster. It accepts seed samples from countries all over the world, without restriction.

Located 1300km from the North Pole, hidden behind thick concrete walls and buried 130 metres inside a mountain is the Svalbard Global Seed Vault.

Despite being funded by Norway, the vault is managed by international organisation Crop Trust and has designated places for every nation on the planet to provide seedlings of native species.

The Seed Vault has the capacity to store 4.5 million varieties of crops. Each variety will contain on average 500 seeds, so a maximum of 2.5 billion seeds may be stored in the Vault.

Currently, the Vault holds more than 860,000 samples, originating from almost every country in the world. Ranging from unique varieties of major African and Asian food staples such as maize, rice, wheat, cowpea, and sorghum to European and South American varieties of eggplant, lettuce, barley, and potato. In fact, the Vault already holds the most diverse collection of food crop seeds in the world.

The focus of the Vault is to safeguard as much of the world’s unique crop genetic material as possible, while also avoiding unnecessary duplication. It will take some years to assemble because some genebanks need to multiply stocks of seed first, and other seeds need regenerating before they can be shipped to Svalbard.

A temperature of -18ºC is required for optimal storage of the seeds, which are stored and sealed in custom made three-ply foil packages. The packages are sealed inside boxes and stored on shelves inside the vault. The low temperature and moisture levels inside the Vault ensure low metabolic activity, keeping the seeds viable for long periods of time.

Web articles – via partners/network co-ordinators. This website and its contents are the exclusive property of ANGA Media Corporation . We appreciate your feedback and respond to every request. Please fill in the form or send us email to: [email protected]
Previous: Scientists May Have Found the Key to Curing Autism, Cancer and HIV: New Research
Next: Six People Arrested In Brussels After Attacks