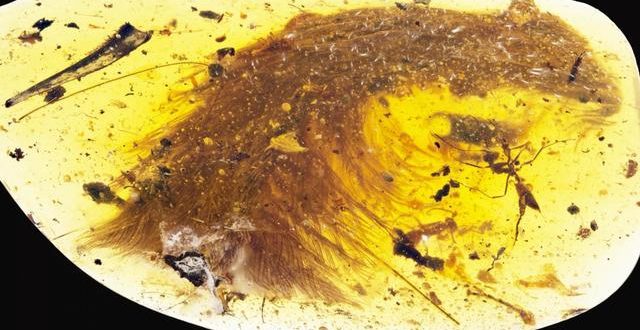 Scientists are calling it a once in a lifetime discovery.

A tiny piece of dinosaur tail trapped in a piece of amber was discovered by people in Myanmar.

It was reportedly discovered in 2015 by Chinese researcher Lida Xing who noticed it being sold at a market as a decorative item.

He and a team ended up analyzing the piece and describing the results in a recently published study; co-author Ryan McKellar of Canada has said that the artifact “…preserves a tail consisting of eight vertebrae from a juvenile; these are surrounded by feathers that are preserved in 3D and with microscopic detail.”

The paper also notes that, as a result of this clarity, they have been able to observe the “…spatial arrangement of follicles and feathers on the body, and micrometer-scale features of the plumage.”

The researchers ultimately concluded that the dinosaur was likely a small coelurosaur which became trapped in the sticky sap and eventually died.

McKellar has indicated that the specimen could give scientists a better understanding of how modern feathers evolved.

Web articles – via partners/network co-ordinators. This website and its contents are the exclusive property of ANGA Media Corporation . We appreciate your feedback and respond to every request. Please fill in the form or send us email to: [email protected]
Previous: Sofia Vergara: Modern Family star reportedly sued by her own embryos
Next: New Spider-Man trailer reveals a new look and feel (Watch)