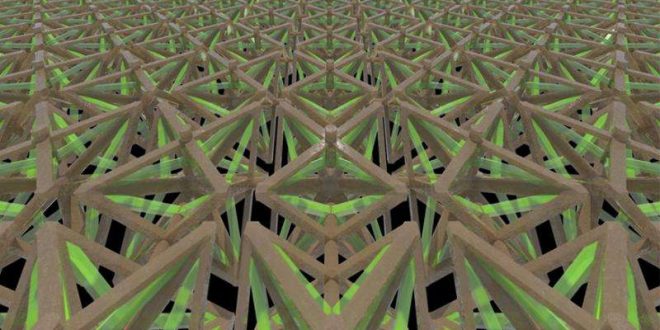 Scientists from MIT and the University of Southern California 3D printed tiny, and quite beautiful, sculptures out of two different materials that usually expand when heated.

In a study published in the Oct. 21 edition of the journal Physical Review Letters, LLNL engineers, along with scientists from the University of Southern California, MIT, and the University of California, Los Angeles, describe the 3D printing of lightweight metamaterials with negative thermal expansion that can be “tuned” to shrink over a large range of temperatures.

“This is a new version of a printing method we have developed and used in the past. We used it to create a thermomechanical metamaterial that may enable applications not possible before,” said principal investigator Chris Spadaccini, director of LLNL’s Center for Engineered Materials and Manufacturing. “It has thermomechanical properties not achievable in conventional bulk materials.”

In the paper, the researchers demonstrate a bi-material microlattice structure, printed from polymer and a polymer/copper composite material that can flex inward, causing the structure to contract when exposed to heat over a range of tens to hundreds of degrees. Researchers note the study may be the first experimental demonstration showing large tunability of negative thermal expansion (NTE) in three Cartesian directions of microlattice structures.

Possible applications for the metamaterials, the researchers concluded, could come in securing parts that tend to move out of alignment under varying heat loads, including microchips and high precision optical mounts.

“Traditionally, the way you compensate for (thermal mismatches) is with active control or heating and cooling,” Spadaccini said. “But what if you could design a material that would hold the object and passively adjust to local temperature changes?”

Jonathan Hopkins, a former LLNL postdoctoral researcher who is now an assistant professor of mechanical aerospace and engineering at UCLA, designed similar structures in a separate paper using a human interaction-based approach rather than computer-driven. Hopkins, who joined the UCLA faculty in 2013, won a Presidential Early Career Award for Scientists and Engineers (PECASE) in February for research directly tied to the latest paper.

“The interesting thing (about the structure) is it’s made of two different materials, beams, and void space,” Hopkins explained. “When you heat it, as long as one of the beams expands more than the others, then the connecting points between each unit cell pulls inward and makes the overall lattice pull inward. It’s an immediate thermal contraction, which is the unique thing about it.”

The thermal expansion also can be zero or positive depending on how the geometry and topology of the structure are engineered, Hopkins said.

“Here we take advantage of projection microstereolithography 3D printing, but this time we expanded the system to be able to fabricate multimaterials; after you print out one material you switch to another,” Wang said. “The challenge is you have to eliminate contamination between materials. If you don’t wash out the residue after every layer, two materials will be mixed up.”

Wang said the microstructured metamaterial could be used in dental fillings, which tend to move or crack when a person eats something hot, to fill in small gaps in bridges or buildings that are normally left open to account for thermal expansion, or in precision devices such as atomic-force microscopes.

“The problem we’re treating is a thermal mismatch problem,” Wang said. “These materials have different thermal expansion coefficients, so once we increase the temperature, they interact with each other and pull inward, so the overall structure’s volume decreases. The next step is to fabricate zero thermal expansion materials that could also solve these problems.”

Web articles – via partners/network co-ordinators. This website and its contents are the exclusive property of ANGA Media Corporation . We appreciate your feedback and respond to every request. Please fill in the form or send us email to: [email protected]
Previous: One dog killed, one injured in beating in Minnedosa
Next: Canadians now spending more on Internet than television, According to CRTC