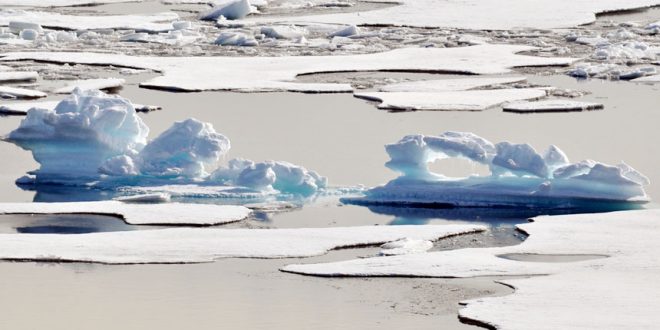 Already rapidly disappearing Arctic sea ice is melting up to 25 per cent more quickly than initially believed, according to research conducted partly by University of Calgary researchers.

Indeed, scientific predictions that foresaw the first ice-free Arctic Ocean in the summertime occurring between 2040 and 2050 may come to pass even sooner, according to Vishnu Nandan, Geography Eyes High doctoral candidate and lead author of the study, published in the academic journal Geophysical Research Letters.

Nandan and his co-authors found that satellite estimates for the sea ice thickness of seasonal ice (one-year-old ice) have been overestimated by up to 25 per cent due to the saline properties of snow cover on top of the ice, affected the accuracy of satellite readings. As such, that ice can likely be expected to melt earlier than projected.

The study calls into question measurements provided over the past decade by the European Space Agency’s satellite, CryoSat-2, which has been the most prominent satellite measuring Arctic sea ice thickness.

“It has been assumed by the scientific community that CryoSat-2 can accurately measure the sea ice freeboard, which is the ice we can see above sea level,” says Nandan. “But that ice is covered in snow and the snow is salty close to where the sea ice surface is. The problem is, microwave measurements from satellites don’t penetrate the salty snow very well, so the satellite is not measuring the proper sea ice freeboard and the satellite readings overestimate the thickness of the ice.”

To compensate for the inaccuracy of the satellite readings, Nandan and his co-researchers — including University of Calgary geography professors John Yackel and Brent Else, as well as researchers from Victoria, Toronto, Germany and France — devised a correction factor that takes into account the snow salinity. This involves a combination of microwave theory and over 10 years of snow property data in the Canadian Arctic.

Previous to this study, it had been understood that since 1979 the volume (or thickness) of that ice has been declining at a rate of 17 per cent per decade. According to the new research however, the rate of summer sea ice decline could be slightly faster.

The consequences of ice-free summers in the Arctic Ocean would be enormous. “Such a transition would radically affect global weather patterns and dramatically increase the magnitude and frequency of storm events,” says Yackel. “It would also dramatically alter the Arctic marine ecosystem, with the added sunlight affecting the Arctic Ocean food web and melting the very ice bed on which animals like polar bears hunt.”

Yackel adds: “Our results suggest that snow salinity should be considered in all future estimates on the Arctic seasonal ice freeboard made from satellites.”

Web articles – via partners/network co-ordinators. This website and its contents are the exclusive property of ANGA Media Corporation . We appreciate your feedback and respond to every request. Please fill in the form or send us email to: [email protected]
Previous: Planet Nibiru will soon be “visible like moon” before thunderbolts scorch earth
Next: Tokyo Motor Show 2017: Nissan IMx concept revealed (Photo)