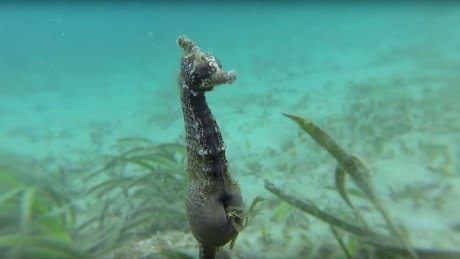 A team of UBC scientists is celebrating after filming what may be the world’s only video a wild seahorse birth.

“We were doing a survey and found a very, very pregnant male that had a tiny tail sticking out of his brood pouch,” said Clayton Manning, a master’s student with Project Seahorse, a marine conservation group based at the University of British Columbia, Canada, and Zoological Society of London. “I had just finished getting his measurements and a baby shot out of the opening. So we sat back and watched the father for a while.”

Manning and Meagan Abele, a Project Seahorse research assistant, are working on a seahorse conservation project in Port Stephens, Australia. They dive and search for seahorses living in the protected waterway to learn about the habitats that best support seahorse populations. The species living in these waters is known as the White’s or Sydney seahorse or by its Latin name Hippocampus whitei.

While seahorse reproduction is well documented, most existing videos of seahorses giving birth are from aquariums. Fortunately Abele had a camera on hand and captured the special moment in nature.

“This is their time to breed,” said Abele, a UBC alumna. “Many of the males we’re finding are super pregnant and ready to burst. It’s surreal to watch it happen.”

Unlike most other animals, female seahorses deposit eggs into a pouch on the male’s adbomen. The males then fertilize, carry and nourish the developing embryos in a form of pregnancy. White’s seahorses carry the babies for three weeks before they are released from the pouch fully formed; about 100 to 250 babies are born at a time.

Worldwide seahorse populations face pressures from fishing, particularly bottom trawling, and habitat degradation. While it is known that seahorses live in many shallow ocean areas around the world, we don’t know a lot about the specific habitat characteristics the affect their numbers.

Manning hopes to better understand how the seagrass, sponge and soft coral habitats of Port Stephens help support the seahorse population in the area. While seahorse numbers have declined precipitously in many parts of the world, Australian populations are generally doing well, providing important research opportunities and reference points.

Web articles – via partners/network co-ordinators. This website and its contents are the exclusive property of ANGA Media Corporation . We appreciate your feedback and respond to every request. Please fill in the form or send us email to: [email protected]
Previous: Zamboni operator faces impaired driving charges in rural Manitoba, Report
Next: Trump demands apology from Hillary Clinton on debate quip “Video”