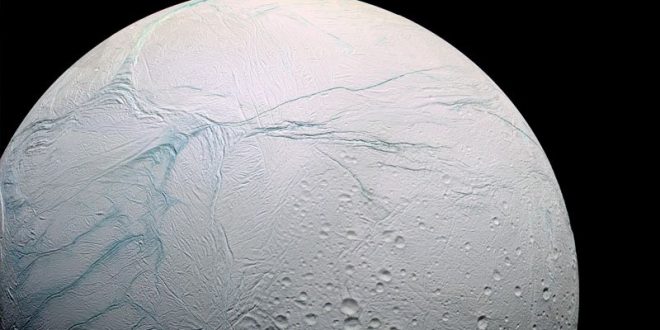 Researchers believe life could exist on Saturn’s moon Enceladus around hydrothermal vents which are similar to those found at the bottom of the Earth’s ocean.

Chemical analysis of the plume suggested conditions favourable for methanogenesis – the generation of methane by microbes that use hydrogen and carbon dioxide to obtain energy.

According to Reuters and the New York Times, scientists working on the space agency’s Cassini mission have discovered that ice plumes on Enceladus contained molecular hydrogen (H2) from hydrothermal vents – the same environment that some researchers believe helped lead to the rise of life here on Earth.

As they reported in the journal Science, the Cassini team detected chemical reactions similar to those that take place near terrestrial deep-sea hydrothermal vents occurring in the subsurface ocean on Enceladus, Space.com added. Those reactions require hydrogen, which the authors explained is likely being continuously produced by subsurface reactions involving rock and hot water.

“The abundance of H2, along with previously observed carbonate species, suggests a state of chemical disequilibria in the Enceladus ocean that represents a chemical energy source capable of supporting life,” Jeffrey Seewald, a researcher at the Woods Hole Oceanographic Institution in Massachusetts who was not involved in the study, wrote in an accompanying “Perspectives” piece published alongside the new paper.

If the discovery is confirmed, and provided that the hydrothermal vents are similar in nature to those found here on Earth, “this observation has fundamental implications for the possibility of life on Enceladus,” the sixth largest of Saturn’s more than 60 moons, Seewald added.

Cassini, which is nearing the end of its 13-year mission exploring Saturn and its moons, detected the molecular hydrogen during its final pass through Enceladus’ plumes in October 2015. During that journey, it gathered samples from an altitude of 30 miles (49 km) above the moon’s southern pole – the spacecraft’s deepest-ever into the plumes, according to Reuters and Space.com.

First discovered in 2005, the geysers of water ice are believed to originate from a large body of water located beneath the moon’s surface ice shell. The water contains organic molecules and is one of the key components for supporting known biological organisms, Space.com said, and now researchers have purportedly found a second key ingredient: an energy source.

“We’re moving towards Enceladus’s ocean being habitable, but we’re not making any claims at this point about it being inhabited,” lead author Hunter Waite of the Southwest Research Institute (SwRI) in San Antonio, Texas told Reuters. “The next time we go back … you’re going to take something that not only picks up on the habitability story, but it starts looking for evidence for life.”

“The story seems to be fitting together,” co-author Chris Glein, also of SwRI, told Space.com. “This is not a detection of life,” he emphasized. “It increases the habitability, but I would never suggest that this makes Enceladus more or less likely to have life itself. I think the only way to answer that question is, we need data.”

Web articles – via partners/network co-ordinators. This website and its contents are the exclusive property of ANGA Media Corporation . We appreciate your feedback and respond to every request. Please fill in the form or send us email to: [email protected]
Previous: Women addicted to their phones at risk of depression, says new study
Next: Mark Wainberg: AIDS researcher who helped save millions and remove stigma dies