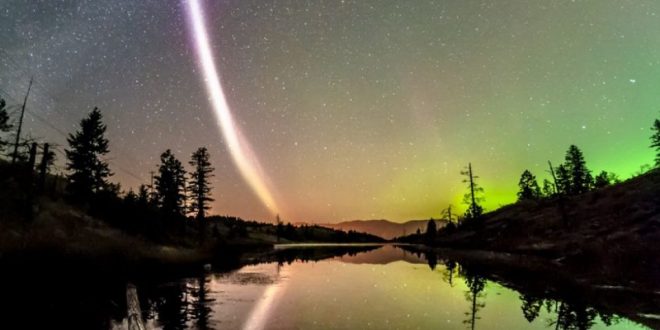 Scientists are calling it “Steve,” and it is puzzling scientists around the world who can’t explain why it’s happening.

The light had been referred to as a proton arc among aurora watchers, but when University of Calgary associate professor Eric Donovan came across the photos, he knew that could not be.

Proton aurora are not visible — although Professor Donovan also did not recognise the light in the photos as a categorised phenomenon.

So he and his colleagues turned to the European Space Agency’s Swarm — a constellation of satellites studying Earth’s magnetic field — to learn more about it.

By monitoring ground sightings of the arc and matching it to Swarm’s movements, he was able to measure an instance of Steve.

When a Swarm satellite flew through the phenomenon, it recorded a temperature spike of 3,000 degrees Celsius in an area 300 kilometres above the Earth’s surface.

The data also showed a 25km-wide ribbon of gas flowing at a significantly faster rate than its surroundings at 6km per second, compared to the 10m/s measured on either side of the ribbon.

While little else is currently known about Steve, Professor Donovan said a surprising aspect of Steve is how often it appeared.

“It turns out that Steve is actually remarkably common, but we hadn’t noticed it before,” he said.

“It’s thanks to ground-based observations, satellites, today’s explosion of access to data and an army of citizen scientists joining forces to document it.”

He told Gizmodo he was working on some theories with a colleague, and was planning on “publishing the idea shortly”.

And the name Steve? The placeholder is in reference to the children’s movie Over the Hedge, where the characters used the name to refer to something they were not sure about.

Some citizen scientists have even suggested slightly more scientific names for the phenomenon — with a cheeky nod to Steve.

Web articles – via partners/network co-ordinators. This website and its contents are the exclusive property of ANGA Media Corporation . We appreciate your feedback and respond to every request. Please fill in the form or send us email to: [email protected]
Previous: Most Habitable Planets Will Be Waterworlds, A New Study Reveals
Next: Whale and boat collisions may be more common, says new research