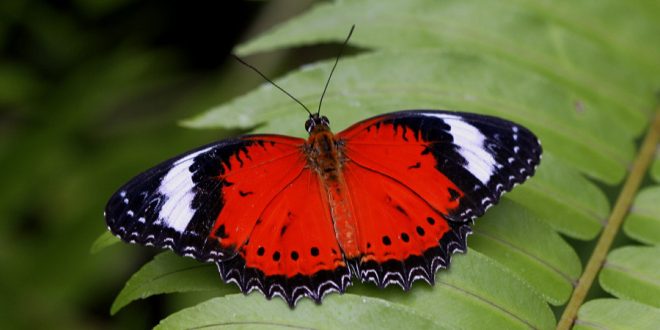 Scientists use CRISPR to show how a key gene has orchestrated the evolution of butterfly wing patterns.

Scientists led by George Washington University’s Arnaud Martin report in the Proceedings of the National Academy of Sciences that they used the CRISPR gene-editing tool to knockout the WntA signaling gene in seven butterfly species. Removing this one gene led to a variety of changes in wing coloration patterns across the butterfly species, they report.

As the New York Times notes, the speckled wood and buckeye butterflies lost their central symmetry system band from their wings, while monarch butterflies had a white pigment bleeding into orange regions. The authors note in their paper that their findings suggest WntA has evolved multiple roles in wing patterning.

“It’s extraordinary that it works so broadly,” author Owen McMillan from the Smithsonian Tropical Research Institute tells the Post. “It’s getting rewired across nymphalids [a family of butterflies] in really fundamentally different ways.”

Martin adds that they are using the wing patterns “as a proxy to understand fundamental rules about the function of genes.”

Web articles – via partners/network co-ordinators. This website and its contents are the exclusive property of ANGA Media Corporation . We appreciate your feedback and respond to every request. Please fill in the form or send us email to: [email protected]
Previous: Scientists identify three new craters near Mercury’s north pole
Next: Woman, 86, using walker dead after crash in east end