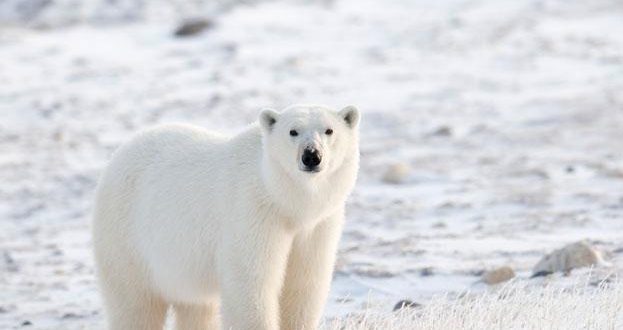 Scientists at the University of Alberta have confirmed what has long been suspected — polar bears rely on their nose and the direction of the wind to hunt seals.

Using satellite telemetry data collected from 123 adult polar bears in Canada’s Hudson Bay over 11 years, the researchers merged the movements of polar bears with wind patterns to explore how they looked for seals.

They hypothesized that when a bear smells prey, it moves up-wind to find it. But what is a bear to do before it smells anything at all?

“Predators search for prey using odours in the air, and their success depends on how they move relative to the wind,” explained Ron Togunov, University of Alberta alumnus and lead author on the study. “Travelling crosswind gives the bears a steady supply of new air streams and maximizes the area they can sense through smell.”
While this phenomenon had been suspected in many animals, it had not been quantified in mammals until now.

“Crosswind search was most frequent when winds were slow, when is is easier to localize the source of a certain smell, and at night when bears are relatively active and when vision is less effective, so bears rely more heavily on their sense of smell.”
The findings also raise questions about the implications of climate change.

“Wind speeds in the Arctic are projected to increase, potentially making olfaction more difficult,” explained Togunov. “It is important to understand how polar bear hunting success will be affected by these changing conditions.”

The study, “Windscapes and olfactory foraging in a large carnivore,” was published in Scientific Reports in April 2017.

Web articles – via partners/network co-ordinators. This website and its contents are the exclusive property of ANGA Media Corporation . We appreciate your feedback and respond to every request. Please fill in the form or send us email to: [email protected]
Previous: Four dead, three injured in Highway 30 crash in Châteauguay
Next: Vancouver police ‘apologize profusely’ for dog attack on 87-year-old woman