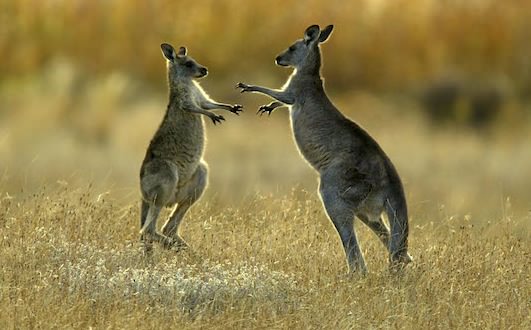 A new study recently discovered an interesting fact about kangaroos. The Australian marsupial uses sometimes a fifth leg. Previously, scientist thought the kangaroo’s tail worked as a way to counterbalance and act like a springboard when it hops.

“We found that when a kangaroo is walking, it uses its tail just like a leg,” said Associate Professor Maxwell Donelan of Simon Fraser University, corresponding author for the study. “They use it to support, propel and power their motion. In fact, they perform as much mechanical work with their tails as we do with one of our legs.”

“We went into this thinking the tail was primarily used like a strut, a balancing pole, or a one-legged milking stool,” said Associate Professor Rodger Kram of CU-Boulder’s Department of Integrative Physiology, a study co-author. “What we didn’t expect to find was how much power the tails of the kangaroos were producing. It was pretty darn surprising.”

Red kangaroos are the largest of the kangaroo species in Australia. When grazing on grasses, they move both hind feet forward “paired limb” style while using their tails and front limbs together to support their bodies. “They appear to be awkward and ungainly walkers when one watches them moseying around in their mobs looking for something to eat,” said Kram. “But it turns out it is not really that awkward, just weird.”

In human locomotion, the back foot acts as the gas pedal and the front foot acts as a brake, which is not especially efficient, said Kram. But he likens a walking kangaroo to a skateboarder who has one foot on the board and uses the other foot — in this case a tail — to push backward off the pavement, increasing the forward motion.

A paper on the subject was published online today in Biology Letters. In addition to Kram and Donelan, the paper was co-authored by Postdoctoral Fellow Shawn O’Connor of Simon Fraser and Emeritus Professor Terence Dawson of the University of New South Wales. The study was funded by the Natural Sciences and Engineering Research Council of Canada, the Australian Research Council, and traveling fellowships from the International Society for Biomechanics and the Journal of Experimental Biology.

Donelan, a former graduate student under Kram, said no animal other than the kangaroo uses its tail like a leg. “Their tails have more than 20 vertebrae, taking on the role of our foot, calf, and thigh bones.”

The research project had its beginnings in 1973, when Dawson, a visiting professor at Harvard University, was working with Harvard Professor Richard Taylor, who later became Kram’s advisor. Dawson coaxed a small group of kangaroos to hop and walk on a large motorized treadmill, with a goal of measuring the energy costs of locomotion at varying speeds. Dawson and Kram eventually showed that a kangaroo can increase its metabolism by 50 times during exercise.

“Kangaroos are really special mammals,” said Dawson. “Work over the past half century has turned the notion that they belong to an inefficient, primitive group of mammals totally on its head.”

The kangaroo tail also acts as a dynamic, springy counterbalance during hopping and boosts balance when male kangaroos grab each other by the chests or shoulders, then rear back and kick each other in the stomach in an attempt to assert dominance for the purpose of reproduction.

For the study the team videotaped five red kangaroos in Dawson’s Sydney lab that had been trained to walk forward on a force-measuring platform with Plexiglas sides. The platform’s sensors measured vertical, backward and forward forces from the legs and tails of the animals. The kangaroos had been taught that walking forward on the platform resulted in being rewarded with sweet treats, said Kram.

Over his career Kram and his students have studied the locomotion of a number of creatures, from elephants, tortoises and llamas to ostriches and beetles.

Although much of the data for the new study was collected years ago, other research efforts by the team members slowly pushed some of the key kangaroo locomotion data to the back burner. “But this was a study we just could not let go of,” said Kram. “It was just too much fun. It’s a real wonder of nature, how these kangaroos move about and what they are able to do.”

Kram calls the evolution of the kangaroo tail, which is thought to have been prehensile when opossum-like kangaroo ancestors were living in trees, an “exaptation” — a shift in the function of a biological trait over time. He likened it to a roll of duct tape in the back of a truck. “You know you are going to use it, you just don’t know when,” he said.

“I’m envious of kangaroos,” said Kram, a competitive master runner in the mile and 1,500 meters. “When they hop faster, they don’t use energy at a faster rate. The have the ability to move faster and not get tired, the ultimate goal of a runner.”

Web articles – via partners/network co-ordinators. This website and its contents are the exclusive property of ANGA Media Corporation . We appreciate your feedback and respond to every request. Please fill in the form or send us email to: [email protected]
Previous: Researchers find ancient Tibetan altitude gene
Next: China bans Ramadan fasting in Muslim province, Report