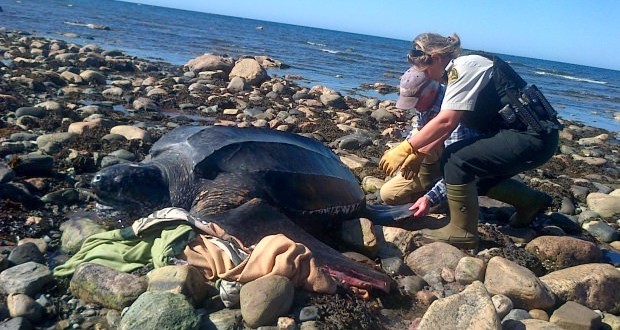 It’s an unusual spectacle to have a leatherback sea turtle grounded on a Newfoundland shoreline, but if there’s a guy who knows how to handle it it is Wayne Ledwell.

Ledwell, with Whale Release and Strandings, says the turtle became beached, but Fisheries Officers, a veterinarian, and local residents were able to work together to move the animal into deep water.

“When we went up, the animal was high and dry on the beach, and we managed to get a net bag on it, and clear a path for it,” said Ledwell. “Then we towed it out into deep water where the animal hopefully went on its journey.”

Wayne Ledwell says this species is usually found in tropical locations, and is a rare sighting in Newfoundland. He says the animal appeared to be in good health.

He says it was wonderful to see the community come together to save the distressed turtle.

Web articles – via partners/network co-ordinators. This website and its contents are the exclusive property of ANGA Media Corporation . We appreciate your feedback and respond to every request. Please fill in the form or send us email to: [email protected]
Previous: Humpback whales spotted in Columbia River (Video)
Next: John Wick 2 to start shooting in the autumn ‘Report’