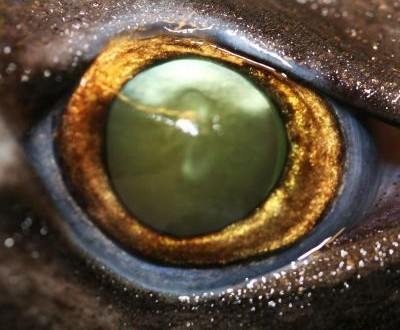 The unique eye structure of deep-sea bioluminescent sharks helps them survive in the twilight zone, a study has found.

Detailed mapping of the eye structure of five species of bioluminescent sharks reveals they have a higher rod densities than other sharks, report a team of international researchers in the journal PLOS ONE.

The mesopelagic twilight zone, or about 200-1000 meters deep in the sea, is a vast, dim habitat, where, with increasing depth, sunlight is progressively replaced by point-like bioluminescent emissions.

To better understand strategies used by bioluminescent predators inhabiting this region that help optimize photon capture, the authors of this study analyzed the eye shape, structure, and retinal cell mapping in the visual systems of five deep-sea bioluminescent sharks, including four Lanternsharks (Etmopteridae) and one kitefin shark (Dalatiidae).

The researchers found that the sharks’ eyes contained a translucent area present in the upper eye orbit of the lantern sharks, which might aid in adjusting counter-illumination, or in using bioluminescence to camouflage the fish. They also found several ocular specializations, such as a gap between the lens and iris that allows extra light to the retina, which was previously unknown in sharks.

“Every bioluminescent signal needs to reach a target photoreceptor to be ecologically efficient. Here, we clearly found evidence that the visual system of bioluminescent sharks has co-evolved with their light-producing capability, even though more work is needed to understand the full story,” said Dr. Claes.

These results reveal an unexpected diversity of photon capture strategies and indicate that like other deep-sea animals, deep-sea sharks possess a number of adaptations to cope with the twilight zone.

Web articles – via partners/network co-ordinators. This website and its contents are the exclusive property of ANGA Media Corporation . We appreciate your feedback and respond to every request. Please fill in the form or send us email to: [email protected]
Previous: Low vitamin D level may increase dementia risk, New Study
Next: Women wear bikinis to support mom mocked for stretch marks (Video)