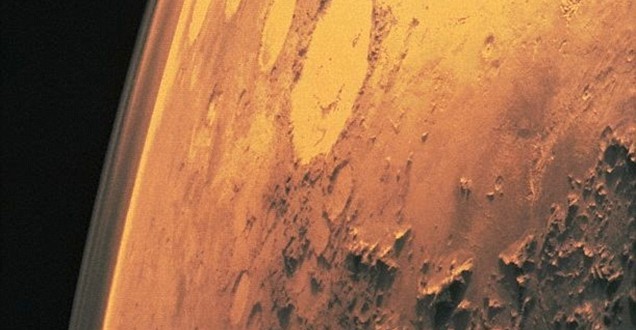 The space agency will gather a host of experts to its headquarters in Washington for a briefing where it promises to announce it has solved a huge mystery surrounding the Red Planet.

NASA’s previous announcements have revealed groundbreaking findings, such as that in July of the discovery of Earth-life planet Kepler-452b, outside of the Solar System.

Experts at this event include Jim Green, the director of planetary science at NASA and Michael Meyer, lead scientist for the Mars Exploration Program.

One theory is they will announce microbial life on the planet but a more likely scenario is evidence of flowing water.

Those hopes have been given a boost by the attendance of scientist Lujendra Ojha, of the Georgia Institute of Technology in Atlanta, at the Nasa announcement.

He first came up with the theory that Mars has liquid salt water flowing through it during warmer months.

Water is one of the key requirements for life and such a discovery would significantly boost chances of alien beings on Mars.

Until this year it was thought Mars was too cold to host water and it just had ice but in April it was discovered the soil was damp with liquid brine, which lowers the freezing point.

That discovery came from NASA’s four-wheel drive Curiosity Rover which is currently probing the baron landscape of the planet.

Last month the Curiosity, which has been based on the Red Planet for three years, found rocks a metre under the surface containing up to four times as much water as previously thought.

There has also been satellite images of what looked like an old riverbed, with round pebbles indicating flowing water was once there.

Recent images from Curiosity also showed dark and basaltic rocks on the planet, leading to speculation the planet may have even once been covered with water – making it biologically closer to our world.

Web articles – via partners/network co-ordinators. This website and its contents are the exclusive property of ANGA Media Corporation . We appreciate your feedback and respond to every request. Please fill in the form or send us email to: [email protected]
Previous: Young Man killed in brazen shooting in Vancouver mall parking lot
Next: Ali Landry: “Ex-Miss USA”, Filmmaker Husband’s Family Killed in Mexico