Home » Science » Morocco : 6.6 Feet Jumps by a Spider to Escape its Predators 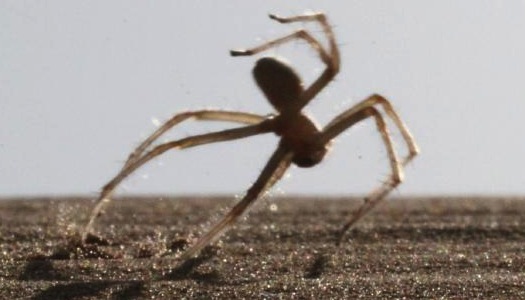 Morocco : 6.6 Feet Jumps by a Spider to Escape its Predators

Morocco : 6.6 Feet Jumps by a Spider to Escape its Predators

In Morocco, there are spiders that know how to do cartwheels. They can cartwheel down sand dunes, and also up sand dunes, which is more than a little bit remarkable. The scientist who found them, Ingo Rechenberg (a professor at the Technical University of Berlin), does what you do when you find an animal with a unique and ingenious mode of locomotion: you make a robot that does the same sort of thing.

Jäger determined the Cebrennus rechenbergi was a new species and named the spider after Rechenberg, who has created a robot model that copies the spider’s movement. Rechenberg said the robot could be used in agriculture, on the ocean floor or on Mars.

The flic-flac spider is distinct from other spiders, like the golden rolling spider in Namibia that passively rolls down sand dunes using gravity, researchers said. Jäger was also able to differentiate the flic-flac spider from its close relative in Tunisia, the Cebrennus villosus, by examining the spider’s sex organs.

The spider is nocturnal and lives in a tube-like home it makes in the sand to protect itself from the sun and potential predators, researchers said.

Web articles – via partners/network co-ordinators. This website and its contents are the exclusive property of ANGA Media Corporation . We appreciate your feedback and respond to every request. Please fill in the form or send us email to: [email protected]
Previous: Colin Pillinger : Mars scientist dies aged 70
Next: International Migratory Bird Day (IMBD)