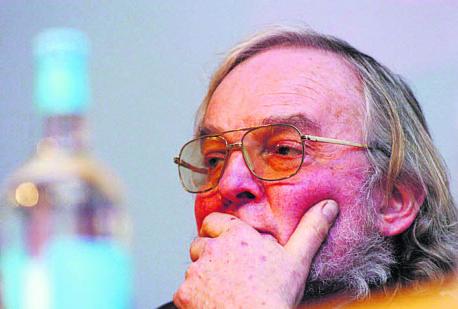 Colin Pillinger, an ebullient space scientist who captured the popular imagination with his failed attempt to land a British probe on Mars, died. He was 70.

Pillinger’s family said Thursday he died at Addenbrooke’s Hospital in Cambridge after suffering a brain hemorrhage while sitting in his garden.

Prof Pillinger, a father of two who was awarded the CBE in 2003, was diagnosed with multiple sclerosis in 2005. His family said yesterday his death was “devastating and unbelievable”.

He became a professor in interplanetary science at the Open University in 1991 and earned a host of other qualifications during his distinguished career, along with numerous awards.

But he was most famous for the ill-fated Beagle 2 mission to Mars, which was supposed to land on the planet on Christmas Day 2003 and search for signs of life, but vanished without a trace. It was last seen heading for Mars on December 19, after separating from its European Space Agency mothership Mars Express.

Prof Pillinger was a fellow of the Royal Astronomical Society. Its deputy executive secretary, Robert Massey, said he expected tributes would be paid to him tomorrow at its AGM.

Mr Massey said: “Colin was an inspirational scientist. He wasn’t afraid to challenge the establishment and get things done.”

Web articles – via partners/network co-ordinators. This website and its contents are the exclusive property of ANGA Media Corporation . We appreciate your feedback and respond to every request. Please fill in the form or send us email to: [email protected]
Previous: New investigation raises alarm over high rate of C-sections: Report
Next: Morocco : 6.6 Feet Jumps by a Spider to Escape its Predators