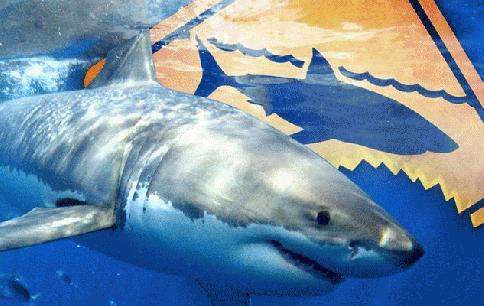 A Cape Cod shark safety flier has some people concerned for not only local business, but also for the safety of the animals themselves. According to the Boston Herald, 415,000 brochures were printed and distributed to the public to inform visitors and locals alike about sharks, but some are now questioning how much good the brochures will do.

Delaney said he appreciates much of the information in the pamphlet, including tips to not swim in deep water or close to seals and the fact that several shark species are considered threatened or endangered. But if he could change one part of the pamphlet, it would be the cover photograph, which he described as reminiscent of the movie “Jaws.”

“The cover has an extra-mean, toothy picture of a shark,” he said. “It’s one more example of how we, as a society, have this general myth that these guys are big, nasty creatures.”

He would also remove one sentence: “The only way to completely rule out a close encounter with a shark is to stay on shore.”

“That one statement set off some peoples’ alarms. But it’s a good product for what it’s intended to be. It may have gone a little too far by saying don’t go in the water,” Delaney said.

For Jeremy Gingras, executive director of the Harwich Chamber of Commerce, the pamphlets will serve as a “tool in the toolbox” for tourists who come with questions about sharks. But the shark pamphlets will be kept behind a desk rather than in public, next to brochures advertising beaches where there has never been a shark sighting, he said.

“Certainly, we view our beaches as safe beaches for people to swim, and the feeling in the brochures is they wouldn’t be,” Gingras said. “At first glance, it seems more like a warning than an informational pamphlet.”

The town of Harwich has decided not to put up shark-warning signs at beaches unless they become necessary, perhaps in the event of a shark sighting or a rise in the town’s seal population, said Selectman Peter Hughes.

“My concern was, in Harwich, if we don’t have sightings or sharks, why are we putting these signs up to scare people off our beaches?” Hughes asked. “We will deploy them if and when we need to deploy them. We’re going to wait and see if we need it.”

With the grant funding, Sears said the communities unified their message, even though “there are currently no consistent outreach efforts for great white sharks occurring in Massachusetts,” he wrote in an April letter sent to Tim Dodd, program manager in the state Executive Office for Administration and Finance.

“I’m not a biologist, but from what I understand, this is a hot spot for these animals,” Sears said. “They’re going to continue coming to these places.”

Web articles – via partners/network co-ordinators. This website and its contents are the exclusive property of ANGA Media Corporation . We appreciate your feedback and respond to every request. Please fill in the form or send us email to: [email protected]
Previous: California air show crash : Pilot Dies During Stunt
Next: Stephen Hawking : AI could be the ‘worst thing ever for humanity’