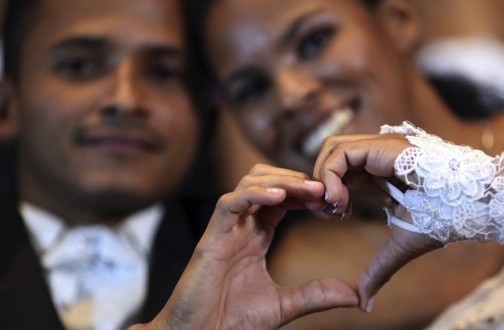 With divorce rates escalating, it comes as no big surprise that many young couples are wary of tying the knot! While predicting the success rate of marriage is a tough, experts claim picking the right partner would be easier if we trusted our gut…our intuition…our inner voice…whatever you want to name it!

According to researchers, newlyweds know, deep down in their guts, if their union will succeed and whether there will be marital bliss in future. The study found the so called “semi-conscious” attitudes that many ignore played a vital role in ascertaining how happy couples were years after they walked down the aisle.

McNulty, who primarily conducts research on romantic relationships, showed a newlywed the photo of his or her spouse for just a third of a second, followed by a word that was positive or negative: “delightful” or “disgusting,” for instance. The newlywed, as fast as possible, had to push a button indicating the word was good or bad.

Psychologists say that witnessing the photo for just long enough to recognize whom you’re looking at, but not enough to study the detail of the picture, causes your brain to automatically retrieve from memory any associations you have with it. This facilitates a speedier response to any words that match those associations.

So, for example, a newlywed who pushed the button for a negative word faster than for a positive word after the photo of the new spouse flashed by, was indicating an automatic attitude that was negative.

McNulty and his colleagues tested for automatic attitudes with 135 heterosexual couples that had been married in the previous six months. They filled out a questionnaire asking them about marital satisfaction. Unsurprisingly, the newlyweds’ marriage evaluations had a decidedly rosy outlook. At six-month intervals for the next four years, each partner re-evaluated their feelings about the marriage using the same questionnaire.

As time passed and their honeymoon phases waned, the initial automatic attitudes gradually started to match up with their reported happiness or unhappiness.

Twelve of the couples even divorced within the four years of the study, McNulty said.

So are some people just in denial about their unhappiness, or are they completely unaware of these feelings to begin with?

McNulty said there is pressure for newlyweds to seem ecstatic: “They just got married, spent thousands of dollars on their wedding, and committed to one another in public. They better be happy!”

But because they were able to admit their lackluster opinions of the partnership, it suggests that certain people just might not realize their deep feelings. But there’s no fooling an automatic attitude test.

“People can’t fake it. They don’t even know what it’s measuring,” he said.

Web articles – via partners/network co-ordinators. This website and its contents are the exclusive property of ANGA Media Corporation . We appreciate your feedback and respond to every request. Please fill in the form or send us email to: [email protected]
Previous: Heidi Montag Surgery Regret : former reality TV Had a Breast Reduction
Next: ‘America’s Next Top Model’ Creator Tyra Banks Graduates from Harvard : Report