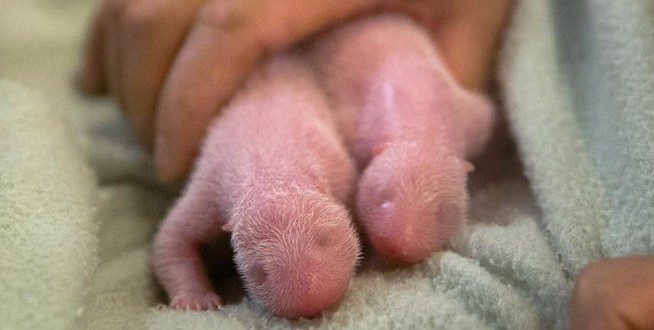 The 15-year-old panda went into labor Monday afternoon and gave birth to the first cub at 6:21 p.m. EDT and the second two minutes later. Hines said zookeepers who had been anticipating only one cub based on a recent ultrasound were surprised by the first-ever twin panda births at Zoo Atlanta.

“We have twins!” Zoo Atlanta announced on its website.

Zookeepers said Lun Lun is caring for one of the cubs while animal management and veterinary teams from the Arthur M. Blank Family Foundation Giant Panda Center care for the other in a nursery center. Officials said they will likely rotate the cubs between the nursery and Lun Lun’s care to ensure they each get enough maternal nurturing without overexerting the 15-year-old giant panda.
Giant pandas typically only care for one cub when twins are born in the wild – which usually leads to only one of the twins surviving, Hines noted.

Giant panda twins have survived in zoos by officials rotating the cubs with the mother during their first few months of life. Hines said giant pandas have a high mortality rate in the first few months after birth, and the risk is greater when twins are born.

Visitors to Zoo Atlanta will likely be able to visit the cubs later this year, Hines said.
She added that Yang Yang and the cubs’ older brothers – Xi Lan, 4, and Po, 2 – remain on exhibit and will not be housed with Lun Lun or the cubs. The separation is normal and occurs naturally in the wild, Hines said.

Less than 1,600 giant pandas are believed to be living in the wild, Hines said. Zoo Atlanta was awarded the International Conservation Award from the Association of Zoos and Aquariums in 2012 for its work to preserve the species.

Web articles – via partners/network co-ordinators. This website and its contents are the exclusive property of ANGA Media Corporation . We appreciate your feedback and respond to every request. Please fill in the form or send us email to: [email protected]
Previous: Act of Sportsmanship : Jonathan Montanez passes Mitchell Marcus the ball (VIDEO)
Next: Photo of Marine running with boy posted on Facebook : Goes Viral