Home » Science » Egypt : Heracleion Under Sea in Mediterranean for More Than 1,200 Years (PHOTO) 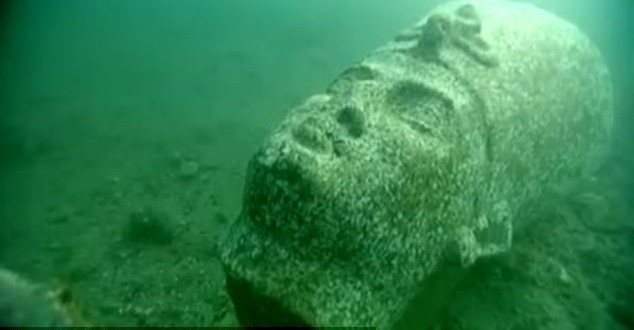 Heracleion Under Sea in Mediterranean for More Than 1,200 Years

Egypt : Heracleion Under Sea in Mediterranean for More Than 1,200 Years (PHOTO)

1,200 years ago the ancient Egyptian city of Heracleion disappeared beneath the Mediterranean. Founded around 8th century BC, well before the foundation of Alexandria in 331 BC, it is believed Heracleion served as the obligatory port of entry to Egypt for all ships coming from the Greek world.
Prior to its discovery in 2000 by archaeologist Franck Goddio and the IEASM (European Institute for Underwater Archaeology), no trace of Thonis-Heracleion had been found (the city was known to the Greeks as Thonis). Its name was almost razed from the memory of mankind, only preserved in ancient classic texts and rare inscriptions found on land by archaeologists.

The Heracleion finds will add tremendous depth to our understanding of the ancient world — not least because, among the discoveries, there are perfectly preserved steles (inscribed pillars) decorated with hieroglyphics. Translated, they will reveal much about the religious and political life in this corner of ancient Egypt.

It was a similar inscription on the Rosetta Stone — discovered in the Nile Delta town of Rosetta in 1799 by a French soldier, and now in the British Museum — that cracked the code of hieroglyphics in the first place.

And like the Rosetta Stone, those steles found beneath the waters of Aboukir Bay are inscribed in Greek and Egyptian, too. Who knows how many more archaeological gems will be uncovered at Heracleion?

The very name of the city is taken from that most famous of Greek heroes, Heracles — aka Hercules — whose 12 labours, from killing the Hydra to capturing Cerberus, the multi-headed hellhound that guarded the gates of the Underworld, captivated the ancient world.

Heraklion, Crete’s capital and largest city, is also named after Heracles, as was Herculaneum, the ancient Roman town that was buried under ash when Vesuvius erupted in 79 AD.

It appears that Heracleion faded in importance in the later classical period, eclipsed by its neighbouring city of Alexandria, which became the capital of Egypt in 312BC.

Still, Heracleion lingered on, later under Roman control, until it slipped into its watery grave some time in the 6th or 7th century AD. What a thrilling discovery we have on our hands now that the sea has, 1,500 years later, given up one of its greatest secrets.

Web articles – via partners/network co-ordinators. This website and its contents are the exclusive property of ANGA Media Corporation . We appreciate your feedback and respond to every request. Please fill in the form or send us email to: [email protected]
Previous: Fast & Furious crew in tribute to Paul Walker (VIDEO)
Next: Adorable Olinguito is first carnivore found in Western Hemisphere in 35 years