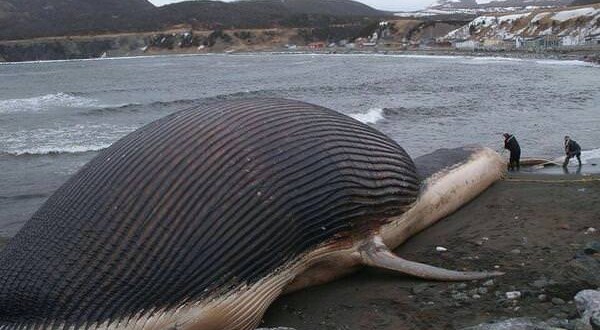 A dead blue whale that is slowly rotting on the beach of the western Newfoundland community of Trout River has the community scrambling to find a way to get rid of it before it explodes.

The whale’s 25-metre carcass washed into Trout River just over a week ago, and has since been pushed up against the beach.

“It’s very difficult to keep people away, simply because it’s not too often that you see a blue whale,” Trout River Town Clerk Emily Butler told the CBC.

But the more pressing issue is what happens down the road, as summer arrives and the temperature goes up. Gases inside the carcass are already causing it to bloat, and the townsfolk are concerned that eventually it’s going to pop. “The whale is blowing up. It looks as if it’s a big balloon, from a distance,” Butler said. “There is a possibility as well, with all these gases inside the whale, that it may possibly explode. That’s a major concern for us.”

And that leads to the real bottom-line problem facing the town: It’s on its own. Butler said she’s been told that because the whale is now on town property, it’s the town’s problem. But with a total population in the neighborhood of 688 people, it has neither the resources nor the expertise to deal with it. Butler said she is now in the process of trying to find a government agency that will help dispose of the whale before it paints the town red on hot summer night.

Web articles – via partners/network co-ordinators. This website and its contents are the exclusive property of ANGA Media Corporation . We appreciate your feedback and respond to every request. Please fill in the form or send us email to: [email protected]
Previous: Alberta : Province and AUPE reach contract deal
Next: Spitzer Telescope : NASA Finds Coldest Star Ever