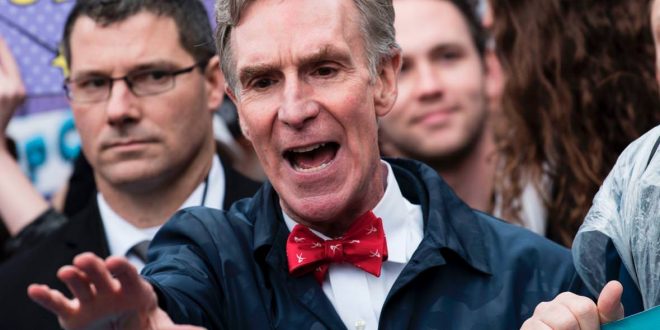 On Earth Day, CNN held a discussion on climate change and Bill Nye was not happy that a skeptic was allowed on the panel.

Bill Nye was invited to speak on CNN’s New Day Saturday program for Earth Day, along with May Boeve, the executive director of green action group 350.org; and William Happer, a climate change skeptic and physicist at Princeton. Nye was clearly exasperated with Happer’s claims, and annoyed that CNN had invited him. To enthusiastic nods from Boeve, Nye said, “I will say, much as I love the CNN, you’re doing a disservice by having one climate change skeptic and not 97 or 98 scientists or engineers concerned about climate change.”

(CNN is hardly the first media organization to give these ideas a platform. The New York Times just hired a climate change denier for their editorial board.)

Happer was, honestly, an embarrassment. He argued that increased carbon dioxide was actually good for the environment, stating, “You can see the greening of the earth already, from the additional carbon dioxide in the atmosphere.”

Happer also claimed that he denies climate change because “the temperature is not rising nearly as fast as the alarmists’ computer models predicted…So the whole basis for the alarmism is not true.” In short, the world is not enough of a hellscape yet for Happer to believe in climate change; this type of thinking was literally the punchline of an Onion article.

“That’s completely wrong,” Nye snapped. “Say what you will, but you have it absolutely wrong…He’s cherry-picking a certain model. The heat ended up in the ocean. This is not controversial in mainstream science, everybody.”

Nye continued: “We’ve got an extraordinary situation here in the United States, where climate change deniers have managed to introduce the idea that some uncertainty – say plus or minus 2% – about the temperature of the ocean is somehow equivalent to plus or minus 100%. Now, everybody, science is political. We use politics to decide where to invest our intellect and treasure. But when it comes to climate change, that is not controversial in the scientific community, any more than the law of universal gravitation.”

Both Nye and Boeve also emphasized the economic benefits of investing in green energy.

Boeve said Trump’s antipathy toward clean energy “doesn’t make any sense, based on what we know about the clean energy economy. If Trump and his ilk were serious about this problem [of creating jobs], they would actually invest in the technologies of the future…and create millions of jobs in the process.”

Nye agreed: “If we were to [invest in green technology], we would have at least 3 million new jobs in the United States that could not be outsourced…We could move forward and we could export this technology. We could be world leaders in this, instead of wringing our hands and cherry-picking data.”

Happer also made a deeply ignorant comparison between the Paris Climate Agreement and Neville Chamberlain’s appeasement of Hitler. Asked what Trump should do about the agreement, he said, “It doesn’t make any scientific sense. It’s just a silly thing. To me, it’s very similar to the Munich Agreements that Mr. Chamberlain signed.”

CNN host Victor Blackwell was aghast. “How is this comparable to Neville Chamberlain’s appeasement of Hitler?” he asked, “How is that an appropriate comparison?”

“It is an appropriate comparison,” said Happer, “because it was a treaty that was not going to do any good. This treaty also will not do any good.” What is it with Trump’s cronies and diminishing the horror of the Holocaust?

Boeve summed up the panel neatly: “It speaks for itself. We’ve got a movement that’s trying to move the world forward to the clean energy economy, to protect our communities from climate change, and we’ve got a conversation that is stuck in the past.”

Web articles – via partners/network co-ordinators. This website and its contents are the exclusive property of ANGA Media Corporation . We appreciate your feedback and respond to every request. Please fill in the form or send us email to: [email protected]
Previous: Not till 2020: Avatar sequels get official release dates
Next: Most Habitable Planets Will Be Waterworlds, A New Study Reveals