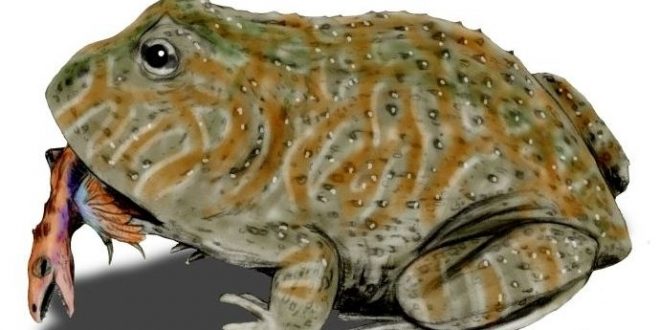 Researchers have discovered a ‘devil’ frog, which was the size of a giant beach ball, had a ferocious bite that let it feed on small dinosaurs and crocodiles.

Beelzebufo ampinga — the largest frog to have ever lived — boasted a bite strong enough to snap up small dinosaurs, according to a team of scientists.

The research, published in the journal Nature Scientific Reports, found that large South American horned frogs have similar bite forces to those of mammalian predators.

“Unlike the vast majority of frogs which have weak jaws and typically consume small prey, horned frogs ambush animals as large as themselves – including other frogs, snakes, and rodents. And their powerful jaws play a critical role in grabbing and subduing the prey”, said Dr Marc Jones, a researcher from the University of Adelaide.

After studying small horned frogs with a head width of about 4.5cm the results showed that they can bite with a force of 30 newtons, or roughly 3kg. Using this data, the team then scaled up their findings to calculate the bite force of larger horned frogs – which the team weren’t able to study directly – with heads of up to 10cm. They found these animals probably have a bite force of around 500 N, comparable to mammals and reptiles with similar sized heads.

“This would feel like having 50 litres of water balanced on your fingertip,” said Professor Kristopher Lappin, from California State Polytechnic University – Pomona.

Finally, based on their scaling relationship, the scientists estimated the bite force of the giant Beelzebufo. Their bite may have produced a force of 2200 N, comparable to formidable mammalian predators like wolves and female tigers.

“At this bite force, Beelzebufo would have been capable of subduing the small and juvenile dinosaurs that shared its environment,” said Jones.

Lappin added: “This is the first time bite force has been measured in a frog. And, speaking from experience, horned frogs have quite an impressive bite, and they tend not to let go. The bite of a large Beelzebufo would have been remarkable, definitely not something I would want to experience first-hand.”

Beelzebufo – which is also referred to as the frog from hell – may have grown up to 41cm tall and could have weighed 4kg or more.

Web articles – via partners/network co-ordinators. This website and its contents are the exclusive property of ANGA Media Corporation . We appreciate your feedback and respond to every request. Please fill in the form or send us email to: [email protected]
Previous: Woman, 86, using walker dead after crash in east end
Next: Scientists report breakthrough in material design