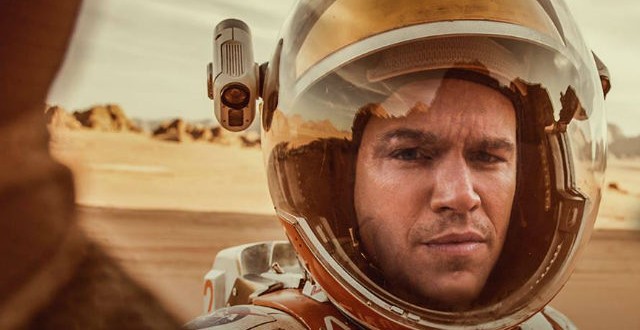 The Martian starring Matt Damon dominated the box office in its second straight weekend of release, hauling in $37 million to bring its total to more than $108 million.

Holding on to second place for another weekend, Hotel Transylvania 2 continues to draw audiences in, taking in an additional $20.3 million. At Tribute.ca, viewers gave it a very respectable rating of 4 stars.

The new release Pan debuted in third place, bringing in an estimated $15.5 million as the only new movie in the top five at the box office. With stiff competition at the box office from The Martian and Hotel Transylvania 2, third place is more disappointing for an opening weekend. Who would have thought we needed yet another version of Peter Pan? However, this is an origin story that takes place before Peter Pan, and stars Hugh Jackman as the pirate Blackbeard. Tribute.ca viewers have rated the film 3 stars.

The Intern held onto fourth place, taking in an extra $8.7 million. Oscar-winners Anne Hathaway and Robert De Niro make a great team, earning a Tribute.ca rating of 4.5 stars from our readers.

Rounding out the top five at the box office this weekend was the crime drama Sicario. It dropped two spots from third place to fifth, earning $7.4 million. Tribute.ca readers are still loving it, rating it 4.5 stars. ~ Sharon Salsberg

Web articles – via partners/network co-ordinators. This website and its contents are the exclusive property of ANGA Media Corporation . We appreciate your feedback and respond to every request. Please fill in the form or send us email to: [email protected]
Previous: Michelle Obama’s Spotify Playlist is Perfectly Curated Girl Power “Listen”
Next: Tamir Rice shooting was ‘justified’, two separate reports find