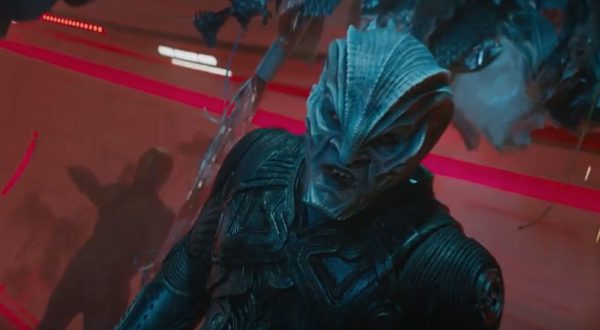 The new trailer for Star Trek Beyond released late Friday night is an extended two and a half minute look at the upcoming summer film and the new direction Justin Lin. is taking the series.

While the first trailer for Star Trek Beyond wasn’t quite the worst thing mankind ever created, it did manage to move so far past the line between indifference and burning-hot nerd rage that Simon Pegg (who wrote the script) felt the need to weigh in and admit that he also didn’t like the trailer much. He asked Star Trek fans to “hang in there” and “be patient” because the final movie would have a lot more “Star Trek stuff” than that first Beastie Boys-filled teaser did. That means this new trailer for the movie has a lot of work to do in terms of getting people excited about Star Trek Beyond.

It’s hard to say if it’ll pull that off, but it doesn’t have any Beastie Boys songs, so that’s a start. There’s also a little bit of Idris Elba’s new villain, an alien lady sitting in Captain Kirk’s chair, Uhura kissing Spock, and the Enterprise getting smashed by a bunch of…something. That’s what Star Trek fans like, right?

Star Trek Beyond will warp onto movie theaters on July 22 as the beloved sci-fi franchise celebrates its 50th anniversary. What did you think of the new trailer?

Web articles – via partners/network co-ordinators. This website and its contents are the exclusive property of ANGA Media Corporation . We appreciate your feedback and respond to every request. Please fill in the form or send us email to: [email protected]
Previous: Girl escapes after year shackled in Toledo basement
Next: USS Zumwalt: “Captain Kirk” takes delivery of US Navy’s futuristic stealth destroyer