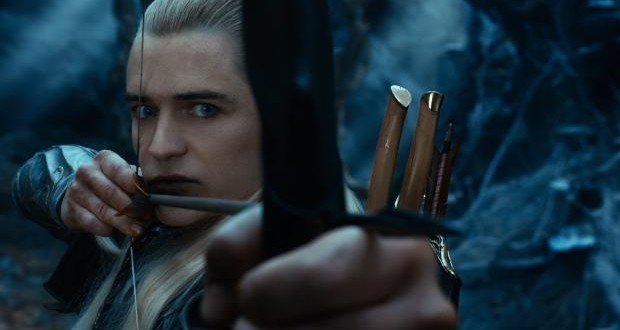 On a busy pre-Christmas weekend at the box office, “The Hobbit: The Desolation of Smaug” held off a very different sequel, “Anchorman 2: The Legend Continues.”

Peter Jackson’s “Hobbit” sequel took in $31.5 million in its second weekend of release for Warner Bros., according to studio estimates Sunday. Though the film isn’t matching the pace of the first “Hobbit” movie, “An Unexpected Journey,” ”The Desolation of Smaug” is doing well abroad. It’s now made more than $400 million worldwide, including $96 million internationally over the weekend.

Anchorman opened last Wednesday following a months-long marketing onslaught and rang up a five-day total of $40 million through yesterday. Ferrell appeared in character seemingly everywhere as the self-important Ron Burgundy, pitching the Dodge Durango in TV commercials, interviewing Peyton Manning for ESPN The Magazine and co-anchoring a local newscast in Nebraska.

The 3D Hobbit sequel stars Martin Freeman as Bilbo Baggins, who leads a band of dwarves on an epic quest that leads to a clash with a fire-breathing dragon named Smaug.
Paramount Pictures, a unit of Viacom Inc, released Anchorman 2. Time Warner Inc.’s Warner Bros distributed The Hobbit.

Web articles – via partners/network co-ordinators. This website and its contents are the exclusive property of ANGA Media Corporation . We appreciate your feedback and respond to every request. Please fill in the form or send us email to: [email protected]
Previous: The Wolf of Wall Street : So South Mumbai! (VIDEO)
Next: ‘3rd Rock’ star Kristen Johnston Diagnosed with Lupus Myelitis