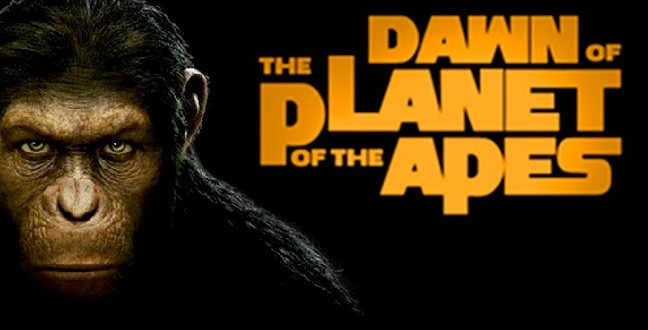 Dawn of the Planet of the Apes

‘Dawn of the Planet of the Apes’ trailer debuts (VIDEO)

There’s a big possibility that you’ll want to skip watching the first trailer for The Dawn of The Planet of the Apes movie if you’ve not seen the first Planet of The Apes film with “Rise” in the title. This first full paragraph will be your warning: spoilers are not included for this new movie, but if you’ve not seen the first one in this reboot series, you’ll want to do that first. This new trailer is for the film that’ll be released inside 2014.

As the trailer begins, we’re informed by Gary Oldman’s disembodied megaphone voice that things have kind of gone badly for the human race in the wake of the monkey revolution Caeser led in Rise. Humanity has been devastated by the artificial virus James Franco’s character was working on and the years since have been a chaos of civil war and infighting as the survivors have struggled to bring themselves back from the brink.

From there, it’s heavily implied that the humans are readying themselves to fight against Caeser’s band of intelligent apes who happen to live nearby. There’s not much given to indicate exactly why Oldman and his cohorts would want to fight a tribe of super smart chimps, but we’ll trust that the movie will provide some good reasons. The trailer ends with Caeser looking a bit less amicable than he was in the original movie.

Web articles – via partners/network co-ordinators. This website and its contents are the exclusive property of ANGA Media Corporation . We appreciate your feedback and respond to every request. Please fill in the form or send us email to: [email protected]
Previous: ABC to judge: Throw out ‘pink slime’ lawsuit (VIDEO)
Next: US man tries to trade 4ft alligator for beer (VIDEO)