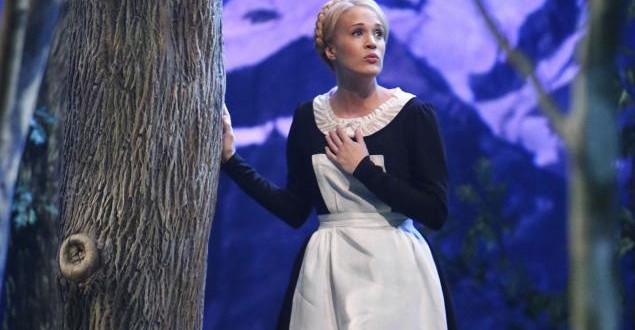 Country music star and former American Idol winner Carrie Underwood has been getting heckled for weeks about taking on the role of Maria von Trapp in NBC’s The Sound of Music Live!. The 30-year-old singer addressed the issue of getting hate tweets from Julie Andrews fans just a few days ago, and now the real Von Trapp family is piling on. Myles von Trapp Derbyshire, the great grandson of Maria von Trapp, says the family wanted Underwood replaced.

Instead, the Von Trapps would have preferred Anne Hathaway for the role of Maria. Francoise Von Trapp (Maria’s granddaughter) shared, “Carrie Underwood as Maria? Seriously? I mean, I have nothing against her personally – she’s an extremely talented country singer, but I’m pretty sure my father is repeatedly rolling over in his grave.

Since the movie version of SOM won an Academy Award the year I was born, it’s always been easy to identify with Julie Andrews’ portrayal of my grandmother. It’s a little harder to envision Carrie that way. (But I do realize that’s what happens when Hollywood freezes time.) And while the girl can sing (although her voice lacks the Soprano purity of Julie Andrews) can she act? I’d like to know who else was in the running. Personally, I’d have put my money on Ann Hathaway, who in her upcoming role as Fantine in Les Miserable, proves that she can act and sing.”

Web articles – via partners/network co-ordinators. This website and its contents are the exclusive property of ANGA Media Corporation . We appreciate your feedback and respond to every request. Please fill in the form or send us email to: [email protected]
Previous: Cannibal Sandwiches : State officials urge consumers to avoid eating raw ground meat
Next: Angela siler-fisher : Doctor accused of threatening woman called ‘homewrecker’