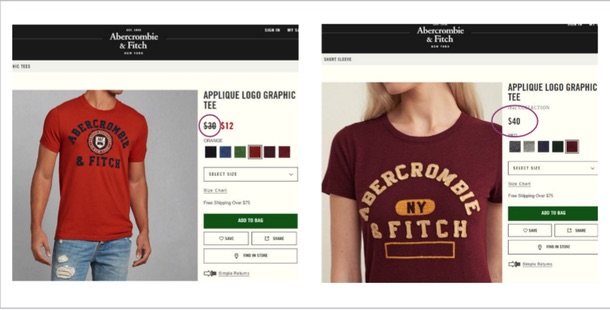 Products geared towards women and girls can cost more than the same items made for men and boys, according to a newly released study.

On average, women’s items were priced 7 percent higher than those for men. Discrepancies were greatest among personal care products, with women’s costing 13 percent more than men’s on average.

While the examples all came from New York, the researchers looked at products from big-name, national retailers such as Target, CVS, Kmart, Gap, Carters and Abercrombie & Fitch, and one can only assume this is an issue in all parts of the country.

This news likely isn’t surprising. The business world is notorious for taking advantage of women. It’s well known that men’s salaries are on average higher than women’s. And with many of these products, companies are obviously charging more for female versions of products because they know women will pay higher prices for them. Let’s face it, on average, a woman is more likely to pay big bucks for a bottle of shampoo for a man.

But when you see the actual numbers and look at examples included in the report and highlighted in the gallery above, the reality is disturbing.

Web articles – via partners/network co-ordinators. This website and its contents are the exclusive property of ANGA Media Corporation . We appreciate your feedback and respond to every request. Please fill in the form or send us email to: [email protected]
Previous: Brampton Man who drove to car dealership with damaged vehicle charged with impaired driving
Next: Ann Makosinski: UBC student wins $50K grant for eDrink invention