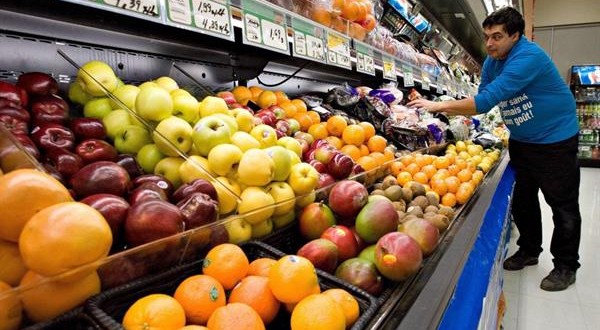 Rising cost of fruit and vegetables pushes inflation up by 1.6 Percent, Report

Rising cost of fruit and vegetables pushes inflation up by 1.6 Percent, Report

Canadians are still buying new cars and vegetables even as they become more expensive, supporting the central bank’s view the economy will recover from a commodity crash without further interest-rate cuts.

The consumer price index rose 1.6 per cent in December from a year ago following the rate of 1.4 per cent the prior month, Statistics Canada said Friday from Ottawa. The core rate that excludes eight volatile products slowed to 1.9 per cent from 2 per cent in the prior month, the slowest pace since July 2014. Economists surveyed by Bloomberg forecast the total rate would advance 1.7 per cent and core by 2 per cent.

Fresh fruit and vegetable costs rose 13 per cent in December from a year earlier, pushing up overall food costs by 3.7 per cent. Gasoline price declines slowed to 4.8 per cent from 10.6 per cent in November, and automobile prices rose 3.1 per cent.

Price gains have lagged the Bank of Canada’s 2 per cent target for more than a year on cheaper gasoline and slack in the economy holding down increases for other goods. Governor Stephen Poloz on Wednesday kept his key lending rate at 0.5 per cent, saying a recovery from a commodity price crash will return inflation to target around the end of next year.

Measures of core inflation that diminish or exclude the most volatile items have been boosted to around 2 per cent by the falling Canadian dollar that makes imports costlier, the central bank said this week. The so-called currency pass-through was as high as 0.7 percentage points in the fourth quarter by the bank’s estimate.

Cutting interest rates again may have extended the Canadian dollar’s rapid slide and led to a burst of inflation, Poloz told reporters Wednesday, part of the reason he said he shifted away from an earlier bias to cut interest rates.

Canadians have noticed some sticker shock for one imported good. Cauliflower prices jumped to $7 a head in some Canadian cities this month, sparking a wave of online discussions and news stories. Canada imports most of its fresh fruits and vegetables from the U.S. or Latin America during its winter months.

Statistics Canada doesn’t publish the weight cauliflower carries in the consumer inflation basket, and the entire “other fresh vegetables” category it belongs to has a weight of 0.7 percentage points.

Seasonally adjusted inflation rose 0.1 percent in December, both for overall prices and for the core basket of goods.

Web articles – via partners/network co-ordinators. This website and its contents are the exclusive property of ANGA Media Corporation . We appreciate your feedback and respond to every request. Please fill in the form or send us email to: [email protected]
Previous: Chess forbidden in Islam: ‘Saudi players’ face toughest opponent after top cleric’s condemnation
Next: Skype to Help Safeguard Online Gamer Security by Hiding IP Addresses