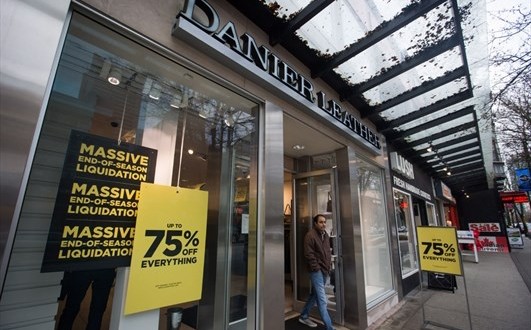 Danier Leather will begin selling off its remaining inventory today at its 76 stores across Canada.

The company, which sells leather clothing and accessories, entered insolvency proceedings in February after losing almost $20 million in 2015.

“Because of the compelling discounts and highly desirable assortment of merchandise, we expect this will be a short sale,” the companies conducting the shut down said in a media release. “Consumers are encouraged to shop early for the best selection.”

But starting today all Danier Leather stores, including the one at Devonshire Mall, will have sales of 25 to 75 per cent off. All stores will also receive new shipments from the warehouse as the company tries to unload its stock.

Around 1,293 people are expected to lose their jobs through the store closures.

Web articles – via partners/network co-ordinators. This website and its contents are the exclusive property of ANGA Media Corporation . We appreciate your feedback and respond to every request. Please fill in the form or send us email to: [email protected]
Previous: Jacobus van Nierop: Dentist of horror goes on trial for mutilating French patients
Next: 2017 Chrysler Pacifica Fuel Economy Announced “Photo”