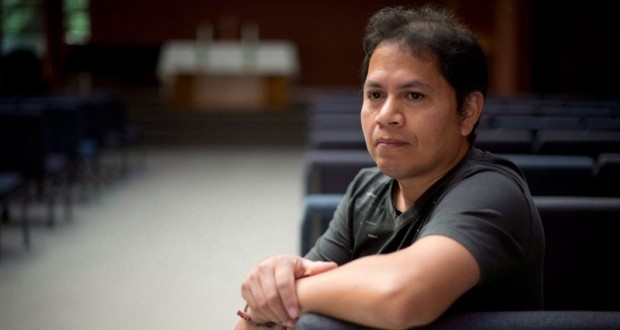 Jose Figueroa is going to have a lot to celebrate next week: his birthday, Christmas and his liberation.

The Langley man has been living in the Walnut Grove Lutheran Church for the past two years, after he took sanctuary when the Canadian government moved to deport him for his political activities in El Salvador nearly two decades ago.

“This decision allows me to safely be reunited with my family,” Figueroa said. “My family and I are happy not only for our family, but also for many other immigrants who can have a positive precedent to give them hope.”

Figueroa arrived in Canada as a refugee from El Salvador in 1997 and was approved in principle as a permanent resident.

However, he was later given a deportation order due to his previous membership with the FMLN.

The group was one faction that fought in El Salvador’s civil war in the 1980s. Figueroa was a non-combatant at the time.

Although Canadian immigration officials treated the FMLN as a dangerous group, it had in fact transitioned into a peaceful political party by the time the deportation order arrived. The FMLN was elected as the government of El Salvador for a time and had ordinary diplomatic relations with Canadian officials.

To avoid being deported away from his Canadian-born children, Figueroa has spent the last two years and two months living inside the Walnut Grove Lutheran Church.

He will officially emerge on Wednesday, Dec. 23.

Web articles – via partners/network co-ordinators. This website and its contents are the exclusive property of ANGA Media Corporation . We appreciate your feedback and respond to every request. Please fill in the form or send us email to: [email protected]
Previous: Researchers use Wi-Fi to see through walls
Next: Hello Kitty database leak exposes info on 3.3 million user accounts