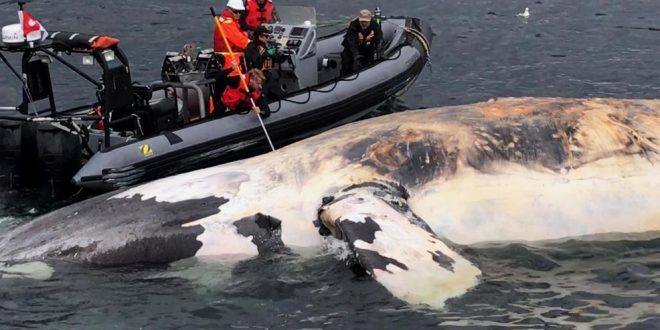 Canadian man Joe Howlett was killed while trying to disentangle an endangered whale trapped in commercial fishing gear Monday, according to Fisheries and Oceans Canada.

“We have lost an irreplaceable member of the whale rescue community. His expertise and dedication will be greatly missed,” Canadian Minister Dominic LeBlanc said in a statement.

59-year-old Joe Howlett was trying to cut free a North Atlantic Right Whale that got tangled in commercial fishing gear off the coast of New Brunswick.

Officials have not confirmed the cause of death, but a friend of Howlett told CBS News that he “was hit by the whale just after it was cut free and started swimming away.”

LeBlanc said in the statement that trying to disentangle whales comes with “serious risks” and “entangled whales can be unpredictable.”

Howlett was a co-founder of the Campobello Whale Rescue Team and a Canadian lobster fisherman who was “no stranger to the risky work of rescuing whales,” The Washington Post reported.

Web articles – via partners/network co-ordinators. This website and its contents are the exclusive property of ANGA Media Corporation . We appreciate your feedback and respond to every request. Please fill in the form or send us email to: [email protected]
Previous: Scientists discover the smallest star in the universe
Next: Three people injured in shooting outside Woodbridge sports bar