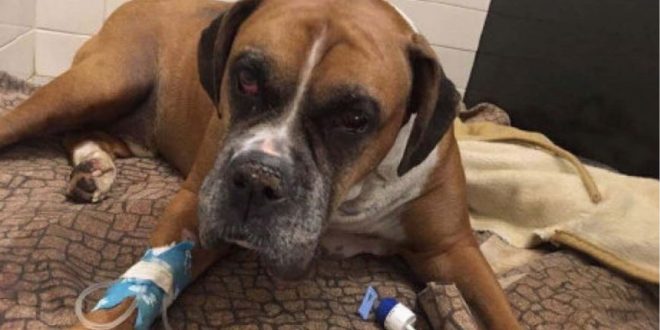 The SPCA is investigating after an injured dog was found buried alive in the Monteregie Tuesday.

The Montérégie SPCA said in a Facebook post that the dog, a Boxer mix, was extremely dehydrated when it was first brought in for care on Tuesday and couldn’t even lift its head.

The SPCA said that the dog appeared to be in stable condition, but it took a turn for the worse on Wednesday afternoon and died.

Linda Robertson, the organization’s director, says the pup was spotted by a man walking in a field in Saint-Paul-D’Abbotsford — he heard a whimper and saw a dog’s paw sticking out of fresh topsoil.

Robertson says the man dug the animal, which had been wrapped in a sheet, out of the ground, adding it’s unclear how long the dog had been underground.

She says it appears the dog was strangled and hit on the head with a blunt object.

“This is the first time we’ve had a situation where a dog was buried alive,” Robertson said.

Web articles – via partners/network co-ordinators. This website and its contents are the exclusive property of ANGA Media Corporation . We appreciate your feedback and respond to every request. Please fill in the form or send us email to: [email protected]
Previous: Researchers Say That Chocolate is Great For Your Heart! (Study)
Next: NASA astronauts replace computer during spacewalk