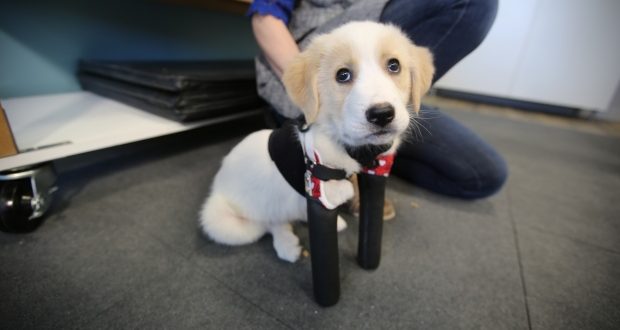 A disabled puppy named Cupid is getting a new chance at finding a loving home, after being left to die in a garbage bin.

Born without front legs and discarded to die in the garbage, Cupid now has a new lease on life thanks to the work done by Janice Olynich at Pawsability.

She has fitted Cupid with prosthetic legs.

On Sunday, Jan. 29, he was brought to The Dog Rescuers Inc. for immediate veterinary care and has been there since.

The Dog Rescuers Inc. is a volunteer-run group that works with more than 20 provincial shelters, pounds and humane societies, and the general public, to rehome abused and neglected dogs.

News of Cupid’s rescue has been circulated in media across Toronto, with one outlet filming a segment with him and Joan Znidarec, président et cofondateur de The Dog Rescuers Inc. d’Oakville earlier this week.

She spoke to the Oakville Beaver Tuesday afternoon, Jan. 31, about his current condition.

“We got him fully checked out. We’ve had him for a week now. Yesterday I took him to a company in Toronto to get him fitted for prosthetic limbs,” said Znidarec.

Cupid is expected to make a full recovery and his missing legs are a result of a birth defect, not human cruelty, Znidarec said.

“The veterinarians figure he was probably (left outside) for two days. They guessed that based on his level of dehydration and based on his protein level being low,” said Znidarec.

She noted the about seven-week-old puppy will remain in The Dog Rescuers Inc.’s care for a month or two, to ensure he will adjust well to his new legs.

“(To ensure) he’s up and walking, sort of speak, before we place him out. However, we will start looking for a good, suitable family,” said Znidarec.

“The lovely girls who brought him to us named him Cupid because his nose is shaped like a heart.”

Registered as a nonprofit organization, The Dog Rescuers Inc. does not qualify for government grants or assistance, and relies heavily on fundraising events and the generosity of donors.

Web articles – via partners/network co-ordinators. This website and its contents are the exclusive property of ANGA Media Corporation . We appreciate your feedback and respond to every request. Please fill in the form or send us email to: [email protected]
Previous: Rohinie Bisesar: PATH stabbing accused asks to speak to victim
Next: Orange alligator gets snapped in South Carolina “Photo”