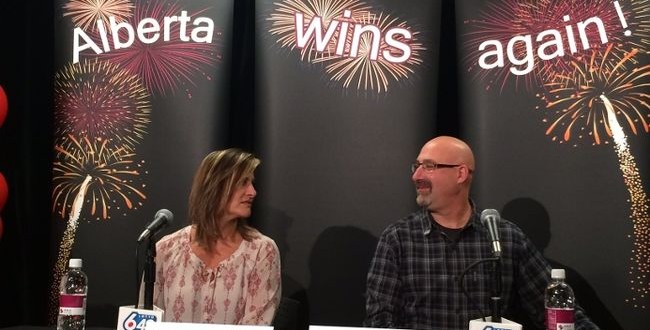 The winners of the Dec. 12 Lotto 6/49 draw — Monique, 44, and Christian Etienne, 45 — were at the Alberta Gaming and Liquor Commission head office in St. Albert on Tuesday to claim the $14.5-million prize. — a win they attribute to their two golden Labrador retrievers.

The two pups got into brownie and scone mix, leaving a giant mess in the couple’s Airdrie home.

“I went to the gas station to rent a carpet cleaner to clean up the dogs’ mess,” said Christian, in a news release. “I picked up the lottery ticket while I was there.”

A few days later he checked the ticket and couldn’t believe when it said he had won.

“I used the self-checker to check,” said Christian. “I couldn’t believe what I was seeing.”

Monique also had a hard time believing the news at first.

“Christian called me and told me that we won $14 million,” said Monique. “I thought he was pulling my leg.”

The couple, who play the 6/49 each week, are still in awe of the fact that a random trip to the gas station has now changed their lives forever.

While they do have a few ideas on what to spend their jackpot on, the couple is just enjoying the experience of winning for now.

“But we were talking about how we can just help to make a lot of people happy,” continued Monique. “I’ve always wanted to take my mom back to Norway, her home country. Now I can.”

Web articles – via partners/network co-ordinators. This website and its contents are the exclusive property of ANGA Media Corporation . We appreciate your feedback and respond to every request. Please fill in the form or send us email to: [email protected]
Previous: Panasonic to buy US-based Hussmann for ‘$1.5 Billion’
Next: Growing potatoes on Mars: ‘Setting course for Martian farming’