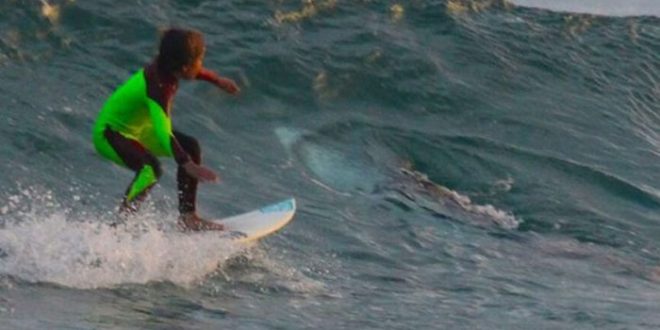 A ten-year-old surfer in Australia has had a close encounter with a great white shark – though at the time he thought he’d gone over a bit of seaweed.

Eden Hasson made headlines this week after his dad photographed him riding over the 2.5-metre shark in Nelson Bay. The young surfer didn’t realise what had happened until his dad zoomed in on the now-infamous photo, thinking the dark shape was seaweed.

“Just as he is taking off I see something out of the corner of my eye. I keep shooting and after he finishes and starts paddling out I zoom in on the second photo and see he’s just done a backhand snap on an 8 foot Great White Sharks head [sic],” the surprised father wrote in a Facebook post.

The photo shows how astonishingly close Eden came to potentially colliding with the shark or becoming its next meal.

Eden also felt something in the water with him at the time, but didn’t think that it could be a great white.

“When I took off I thought I saw something, and when I went to do the first snap off the top I hit something and I thought it was seaweed,” he told the Newcastle Herald.

“Then when [Dad] called me in I thought it must be a shark, because there was a big school of fish we saw.”

But it didn’t put Eden or any of his family off surfing – the boy went back into the surf the next day. Mr Hasson says he’s taught his children “sharks are to be respected, not feared”.

It’s a moment which will be memorialised in the family’s home, with Mr Hasson saying the photo is “going straight to the pool room”.

Web articles – via partners/network co-ordinators. This website and its contents are the exclusive property of ANGA Media Corporation . We appreciate your feedback and respond to every request. Please fill in the form or send us email to: [email protected]
Previous: Siera Bearchell: Miss Universe Canada Slams Body Shamers on Social Media
Next: Meet The 15 Million Computer With ‘2000 Qubits’ By D-Wave