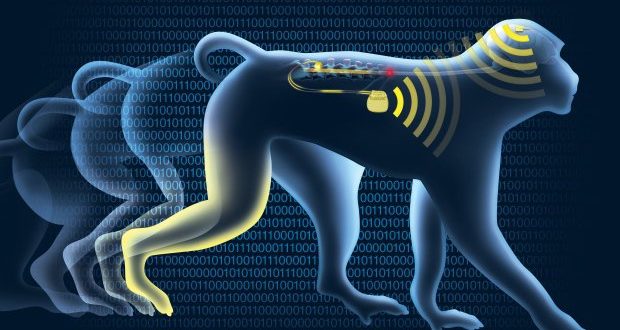 Researchers trying to find a cure for spinal injuries have claimed a notable success.

Grégoire Courtine, a neuroscientist with the Swiss Federal Institute of Technology, has produced a paper describing how his team mapped and recorded the neural activity in monkeys standing and walking on treadmills. The eggheads then crippled the beasts, implanted electrodes in their brains and at the base of the spinal cord, and replayed the messages to make the animals move again.

Back in 2012, Courtine used a chemical cocktail to “re-awaken” the damaged spinal cord of paraplegic rats, allowing them to walk, run, and evade obstacles. For the latest experiment, Courtine’s team chose a different route, one involving implants in the brain and in the area of the spinal injury. It marks the first time that a neuroprosthetic device has been used to restore locomotion in primates, and the scientists are optimistic the system can be adapted to humans.

Paralysis happens when a spinal cord lesion prevents brain signals from the motor cortex (the part of the brain responsible for movement) from reaching neurons that activate muscles. Regrettably, the nerves of the spinal cord do not heal spontaneously after injury, and scientists haven’t had much luck using various pharmacological and regenerative techniques. The World Health Organization estimates that somewhere between 250,000 to 500,000 people suffer a spinal cord injury each year worldwide, highlighting the extent of the problem.

The brain-spine interface overcomes a damaged connection by bridging the spinal cord injury—and it does so in real-time and via wireless technology. The neuroprosthetic device implanted in the monkey’s brain correctly interprets activity generated by the motor cortex, and relays this information to a system of electrodes placed over the surface of the spinal cord, just below the injury. A burst of just a few volts, delivered at the right location, triggers specific muscles in the legs. Monkeys implanted with the device were able to walk within six days of the spinal cord injury.

In experiments, the device allowed monkeys to walk and behave freely, and without having to be hooked up to a tangled web of wires and electronics. The monkeys, who had partial lesions inflicted to their spinal cords, showed immediate progress, and were able to spontaneously regain full mobility after three months.

“The primate was able to walk immediately once the brain-spine interface was activated,” said study co-author Erwan Bezard of Bordeaux in a statement. “No physiotherapy or training was necessary.”

The scientists are hopeful that the device will work for more serious spinal injuries, though according toNewcastle University scientist Andrew Jackson, who wrote a Nature News and Views article on the research, this will likely happen with the help of other interventions, such as chemical and electrical stimulation. Excitingly, the new system might be able to leverage the power of the brain’s plasticity; connections between two neurons are given a boost when both are active at the same time. It’s possible that this device could strengthen surviving motor pathways, further contributing to rehabilitation.

“For the first time, I can imagine a completely paralyzed patient able to move their legs through this brain-spine interface.”

Looking ahead, the researchers say a similar system could be adapted to humans, but more work is need to address locomotion issues such as balance, steering, and obstacle avoidance—motor skills which were not addressed in the current study. On the plus side, many of the components used in the brain-spine interface have already been approved for humans. If all goes well, human trials could start in just a few years.

“For the first time, I can imagine a completely paralyzed patient able to move their legs through this brain-spine interface,” noted Jocelyne Bloch, the lead neurosurgeon on the project.

Web articles – via partners/network co-ordinators. This website and its contents are the exclusive property of ANGA Media Corporation . We appreciate your feedback and respond to every request. Please fill in the form or send us email to: [email protected]
Previous: Man charged with impaired driving in New Glasgow
Next: Sleep deficiency and skipping breakfast may increase obesity risk, Says New Study