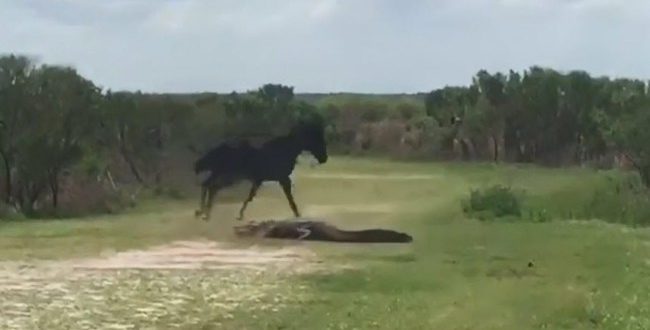 A group of friends hiking near Gainesville caught a strange sight in their path: a fight between a horse and an alligator. And it appears the horse emerged victorious.

Krystal M. Berry posted the shocking video on Facebook, and it’s exploding across the internet.

The group of horses, including a little colt, were grazing alongside the path. The alligator walked up and stopped – a little too close for one big stallion to tolerate.

The horse got in a few good stomps before the gator managed to land a solid chomp on the left foreleg.

The horse danced free, and both animals retreated.

The stallion went back to his herd and continued grazing. The gator eased away, waddling off the path before sliding into the water on the other side.

Berry speculated that the “daddy” of the horse family was protecting a mare and a colt that were grazing nearby.

She also said she believes both animals came out of the fracas none the worse for wear.

“There were no clear signs of bleeding/distress when we left the site,” she wrote.

Payne’s Prairie Preserve, located south of Gainesville near the little town of Micanopy, covers 21,000 acres and is home to wild gators, horses, bison and hundreds of species of birds.

Web articles – via partners/network co-ordinators. This website and its contents are the exclusive property of ANGA Media Corporation . We appreciate your feedback and respond to every request. Please fill in the form or send us email to: [email protected]
Previous: Two dead, three injured in head-on crash in northern Alberta
Next: Women addicted to their phones at risk of depression, says new study