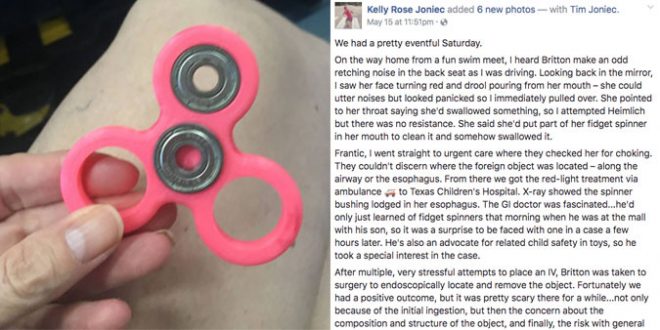 An east Texas mother is warning other parents of the potential dangers of a toy that has surged in popularity with kids.

Kelly Rose Joniec wrote in a Facebook post that her 10-year-old daughter, Britton, had put a bearing from a fidget spinner in her mouth to clean it, but accidentally swallowed it.

They were driving home from a swim meet Saturday when Joniec said she could hear her daughter retching in the backseat.

“Looking back in the mirror, I saw her face turning red and drool pouring from her mouth – she could utter noises but looked panicked so I immediately pulled over,” Joniec writes. “She pointed to her throat saying she’d swallowed something, so I attempted Heimlich but there was no resistance.”

Joniec drove Britton to an urgent care center, but doctors were unable to see where the bearing was stuck. Britton was then taken by ambulance to a hospital and an X-ray showed the bearing was lodged in the esophagus.

Doctors performed an upper endoscopy to safely remove the bearing.

Joniec writes that parents should be alert and cautious with kids playing with fidget spinners.

“Kids of all ages may be getting them, but not all spinners come with age-appropriate warnings,” she writes. “The bushings pop out easily, so if you have young kids (under 8 years old), keep in mind that these present a potential choking hazard.”

Fidget spinners have two or three small paddles that spin on a central radius, and come in different colors and can even light up. They are sometimes touted as a stress-relief toy, but also have become a headache for teachers, reports say.

Web articles – via partners/network co-ordinators. This website and its contents are the exclusive property of ANGA Media Corporation . We appreciate your feedback and respond to every request. Please fill in the form or send us email to: [email protected]
Previous: Scientists found a dinosaur that still has its skin and guts (research)
Next: NASA probes spot a manmade BUBBLE around Earth (Watch Video)