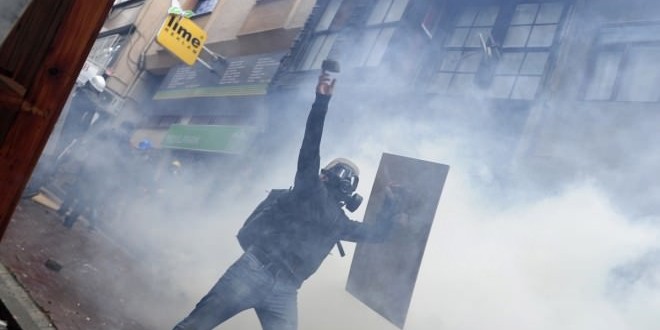 A massive police operation has cracked down on May Day protests in the Turkish city of Istanbul. Riot officers have blocked off the city’s iconic Taksim Square and have deployed tear gas and water cannon against crowds of demonstrators.

Defying a ban on May Day protests, hundreds of protesters clashed with police in the Besiktas neighborhood of Istanbul. Some activists threw Molotov cocktails and fireworks at police officers, who retaliated with rubber bullets, tear gas and water cannon.

Around 40,000 police officers, water cannon trucks and armoured vehicles were deployed throughout Istanbul according to reports.

Police cordoned off all the avenues, streets and alleys leading to Taksim.

Prime Minister Recep Tayyip Erdogan warned protesters to “give up hopes” of meeting on Taksim Square.

The unions rejected the idea.

“We will be in Taksim despite the irrational and illegal ban. All roads will lead to Taksim on May Day, and our struggle for labour, equality, freedom, justice and peace will continue,” the main unions said in a joint statement on Wednesday.

Web articles – via partners/network co-ordinators. This website and its contents are the exclusive property of ANGA Media Corporation . We appreciate your feedback and respond to every request. Please fill in the form or send us email to: [email protected]
Previous: Men died in gunfight with each other on the Danforth : Police
Next: New Tennessee will criminalize moms who use drugs while pregnant