Home » World » Shanghai to suffer smog into the weekend (VIDEO) 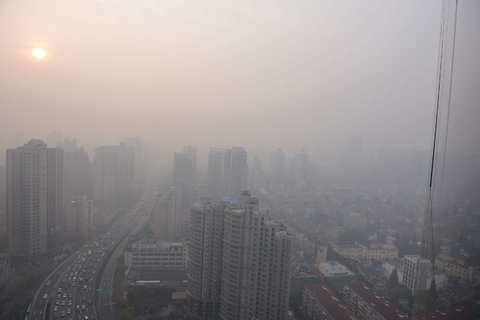 Shanghai to suffer smog into the weekend

Shanghai to suffer smog into the weekend (VIDEO)

Authorities in Shanghai have ordered schoolchildren indoors and halted all construction as China’s financial hub suffered one its worst bouts of air pollution.

isibility was reduced to a few dozen metres, while flights were delayed and the city’s spectacular skyline was obscured.

The financial district was shrouded in a yellow haze, and noticeably fewer people walked the city’s streets. Vehicle traffic also was thinner, as authorities pulled 30% of government vehicles from the roads. They also banned fireworks and public sporting events.

“This is good for the environmental stocks like Fujian Longking and Yonker Environmental Protection,” said Zhang.

An orange-level haze alert, the second highest, remained in effect, according to the Shanghai government information office microblog. Elevated highways were facing heavy congestion with some highway entrances closed and some river traffic halted, the microblog said.

Pollutants are concentrating because of weak winds that are coming predominantly from the northeast, according to Shanghai’s monitoring center. Heavy to severe pollution is expected on Friday for Shanghai and neighbouring Zhejiang and Jiangsu provinces, it said. Nanjing, the capital of Jiangsu, cancelled school on Friday after issuing a red pollution alert on Thursday, according to the local propaganda office’s microblog.

In Hong Kong, the air pollution index reached “very high” levels at three roadside monitors, according to the city’s Environment Protection Department. The index read 134 in the Central business district at 8am local time, and 126 in the Causeway Bay area, with nitrogen dioxide the key pollutant.

Nitrogen dioxide readings at Central hit 229.5 microgrammes per cubic metre, past the level at which the gas becomes toxic. The gas can cause significant inflammation of the airways once concentration levels exceed 200 microgrammes, according to the Geneva-based WHO.

Outdoor air pollution can cause lung cancer, the International Agency for Research on Cancer, a WHO agency said in October, ranking it as a carcinogen for the first time.

Web articles – via partners/network co-ordinators. This website and its contents are the exclusive property of ANGA Media Corporation . We appreciate your feedback and respond to every request. Please fill in the form or send us email to: [email protected]
Previous: Happy Meal : Couple order McDonald’s breakfast, get served bag of cash
Next: Kaley Cuoco Engaged to Ryan Sweeting : Beach Buddies in the Bahamas