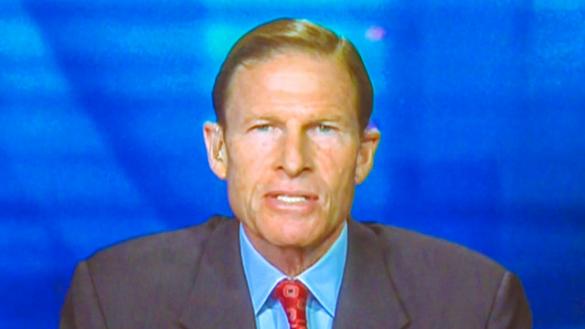 Blumenthal called for a renewed push to pass gun control legislation during an appearance on CBS’ “Face the Nation.”

“Obviously, not every kind of gun violence is going to be prevented by laws out of Washington,” he said. “But at least we can make a start and I am going to urge that we bring back those bills, maybe reconfigure them, centre on mental health, which is a point where we can agree that we need more resources to make the country healthier and to make sure that these kinds of horrific, insane, mad occurrences are stopped.

“And the Congress will be complicit if we fail in that,” he said.

On Friday night a 22-year-old college student identified as Elliot Rodger allegedly stabbed three people to death in his apartment in Santa Barbara, California, and then drove through the city and fatally shot three others with handguns he had legally bought. He later killed himself.

A YouTube video and a lengthy “manifesto” Rodger left behind were filled with rage and plans for “slaughtering” women because he felt they had rejected him. Rodger had been visited by Santa Barbara authorities last month after a family member expressed concerns about him. The Santa Barbara sheriff, Bill Brown, said Rodger was courteous to the deputies and did not meet the criteria for legal intervention.

The Newtown massacre, coming on top of other mass shootings, set off an intense national debate about gun violence. But a few months later the Senate defeated Obama’s proposals to restrict sales of certain types of guns and require greater background checks. Gun-rights groups, a powerful national political force, opposed the measures, saying they would infringe on Americans’ constitutional rights.

Blumenthal said the defeated legislation could have given authorities in Santa Barbara a better chance to intervene in Rodger’s case before the killings and would provide for “professionals trained in diagnosing and detecting this kind of derangement”.

The Brady Campaign to Prevent Gun Violence ranks California as the state with the strongest gun control measures, requiring background checks for all firearms sales, regardless of the type of gun or where it was purchased.

Web articles – via partners/network co-ordinators. This website and its contents are the exclusive property of ANGA Media Corporation . We appreciate your feedback and respond to every request. Please fill in the form or send us email to: [email protected]
Previous: Sick Kids Researchers figure out formula for predicting autism
Next: Myrtle Beach shooting : 3 Killed In Front Of Busy Boardwalk (Video)