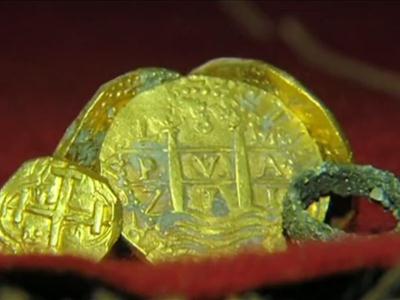 The treasure-hunting Schmitt family made the discovery of a lifetime after finding what could be $300,000 worth of gold off the coast of Fort Pierce in Florida, reports the Orlando Sentinel. The family—along with diver and friend, Dale Zeak— found the fortune about 150 yards offshore and just 15 feet down. They uncovered 64 feet of thin gold chain, five gold coins and a gold ring. The treasure is estimated to be 300 years old. Rick Schmitt, who owns Booty Salvage, has been diving for treasure since 1964. Although the 65-year-old has been on hundreds of excursions and has found coins and other artifacts in the past, this is the largest find he has ever made.

Schmitt’s salvage company is a subcontractor for 1715 Fleet – Queens Jewels LLC, the company that owns the rights to dive on the wreckage site. “To be the first person to touch an artifact in 300 years, is indescribable,” Co-founder Brent Brisben said. “They were there 150 years before the Civil War. It’s truly remarkable to be able to bring that back.” The treasure comes from a fleet of Spanish ships pounded by a strong hurricane off Florida’s coast on July 30, 1715. More than 1,000 people died as a result of the storm and 11 ships sank to the bottom of the ocean floor. Gold, silver and other artifacts were scattered across the Florida coast, much of which has yet to be discovered. The state gets first pick of the treasure and up to 20 percent of the rarest finds will be displayed in museums. The rest will be split equally between Brisben’s company and the Schmitts.

Web articles – via partners/network co-ordinators. This website and its contents are the exclusive property of ANGA Media Corporation . We appreciate your feedback and respond to every request. Please fill in the form or send us email to: [email protected]
Previous: Tabitha Leah Ritchie baby bump was cold and hard
Next: Driver heard a cat’s scream under hood after trip to Florida