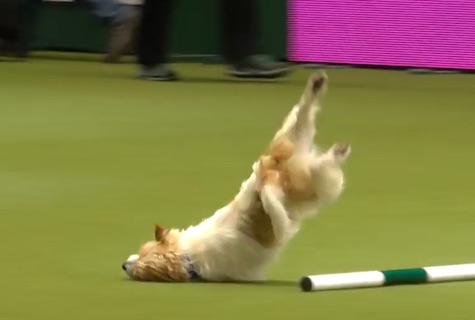 Olly the Jack Russell Terrier isn’t going to win Best in Show anytime soon, but he won the internet on Monday with his enthusiastic agility-course performance.

Olly competed in the Crufts Rescue Dog Agility competition in Birmingham, England, and had a little trouble. Specifically, he face-planted after mistiming a jump.

But that’s not all. He went through a tunnel backward, skipped weaving through the poles twice and almost went tail over snout climbing a ramp.

Sit back and enjoy the chortles from the British announcers and let Olly’s follies lift you out of the post-DST funk.

He’s the hero we need on this bleak occasion.