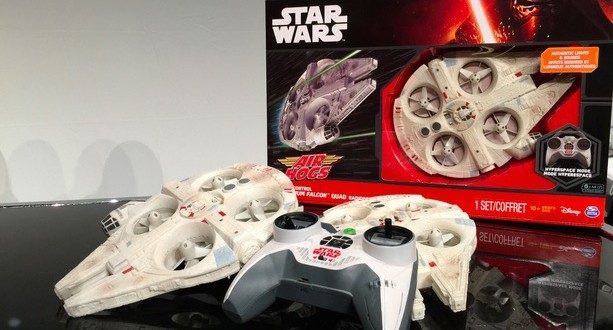 Created by Air Hogs, the Millennium Falcon quadcopter can be controlled by remote control, and features lights and sound effects from the movies, ranging from a hyperdrive sound effect, to voice clips from Chewbacca and R2D2.

It has an operational range of up to about 60 metres, just shy of a galaxy far, far away. The drone is made out of a “high density foam” that makes it durable and light. This is perfect for a Star Wars fan that has never touched a drone before, or for taking on oncoming TIE fighters.

The drone was revealed as a part of a Star Wars global toy unboxing livestream event that took place over a 17 hour period.

This was to create hype for new Star Wars merchandise being released in time for Star Wars: Episode VII on “Force Friday”.

If the Millennium Falcon isn’t your style, Air Hogs also announced a flyable X-Wing. Featuring a little R2D2 and two propellers, the flyable ship can also be controlled by remote control.

Unlike the Millennium Falcon drone, it wasn’t demonstrated, as it was considered “too dangerous” to fly inside. Probably not a good idea to fly it into any Death Stars any time soon.

Web articles – via partners/network co-ordinators. This website and its contents are the exclusive property of ANGA Media Corporation . We appreciate your feedback and respond to every request. Please fill in the form or send us email to: [email protected]
Previous: Katie Rees: “Former Miss Nevada USA” arrested again on drug charges
Next: Taylor Swift’s ‘Wildest Dreams’ video slammed for being ‘racist’, Report