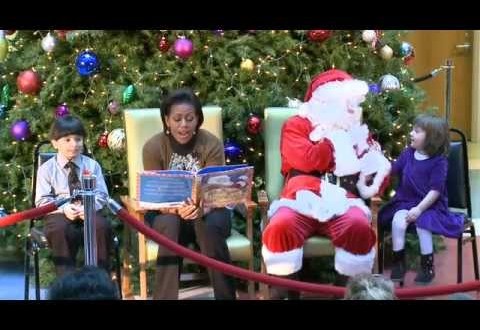 As the holiday season descends upon us, First Lady Michelle Obama reveals how she preps the White House for the celebratory months ahead.

In a recent interview with Ladies’ Home Journal, Mrs. Obama, who appears on the cover of the magazine’s December/January 2014 issue, says that what is most important to her when preparing the White House for the holiday season is maintaining a feeling of acceptance and openness to visitors.

“Christmas has always been a special time in my household,” Michelle said. And as with most families, the Obamas’ holiday traditions are a mix from both sides of the family. For example, their family talent show—a yearly practice where everyone has to perform a talent before opening gifts—comes from Michelle’s family.

“Our extended family was so large, people couldn’t really afford to buy gifts for everyone,” she explained. “So a couple of our aunts would go out and purchase small gifts. They would put them in a basket and in order to get a gift you had to perform. Everyone from the smallest to the tallest, from the oldest to the youngest, had to perform something. You could tell a joke, read a poem, do a backflip—anything counted. It’s a tradition that we’ve carried on today.”

Bo, the First Dog, has even gotten into the talent show. “I’ve hula-hooped, done a dog trick with Bo, and read poems,” Michelle continued. “[Sasha and Malia] will sing or put on plays. The President and some of the other dads will get together and do a song.”

That’s not the only thing that remains the same year after year, even living in the White House. According to Michelle, decorating a Christmas tree is another treasured tradition. Though most of the trees in the house are decorated by a team of volunteers, one is always reserved for the First Family to dress.

“We’ll have hot chocolate, light a fire no matter what the weather is, get out a basket of decorations, and then I’ll put on the first holiday music of the season.”

So what exactly are some of the First Lady’s favorite Christmas songs? “I have a phenomenal playlist that includes, of course, ‘A Charlie Brown Christmas,’ as well as James Taylor, Mariah Carey, Boyz II Men, and Nat King Cole. The kids tease me that they know it’s Christmas when I pull out my playlist.”

Web articles – via partners/network co-ordinators. This website and its contents are the exclusive property of ANGA Media Corporation . We appreciate your feedback and respond to every request. Please fill in the form or send us email to: [email protected]
Previous: Four year old genius has same IQ as Albert Einstein
Next: Actress Candace Cameron Bure Talks About Bulimia