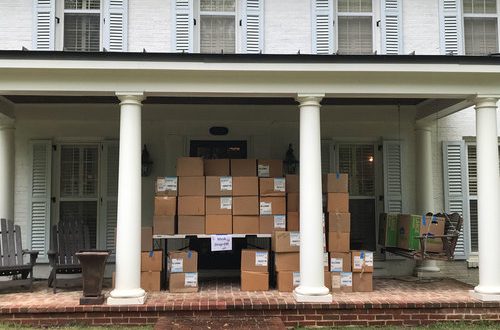 A group of volunteers has been working to repair 27,000 desperately needed N95 protective masks for a Memphis, Tennessee, hospital battling the coronavirus pandemic — and they got most of them done in a weekend.

Baptist Memorial Hospital-Memphis recently found dozens of cases of the masks in storage but couldn’t use them because the elastic straps had dry-rotted and needed to be replaced.

It was a huge job that organizers Stephanie Lepone and Ginna Rauls stumbled into almost by accident. The women are longtime friends and have regular sewing get togethers, Lepone told CNN.

Lepone said she works full time as an engineer and has three kids, but she wanted to do something to help while she’s quarantined at home.

They had started making cloth masks for a pediatrician’s office and Lepone asked a friend, who’s a director at Baptist Memorial Health Care, to see whether they needed cloth masks.

“He texted back and he said, ‘I might have something else for y’all to do if you’re interested … would you guys be willing to sew new straps on the masks?'” she said.

They originally agreed to fix 6,000 masks and started rounding up volunteers, Lepone said.

Lepone and Rauls recruited 15 or 20 team leaders, who invited friends, church members and other people to help.

They ended up with 410 volunteers.

Some of the helpers didn’t know how to sew, so they had online training lessons on Zoom and Lepone posted YouTube tutorials on how to replace the straps with a sewing machine or by hand.

Once they had volunteers lined up, Lepone told the hospital to deliver the 140 cases of N95s.
“Just bring them to my house. I have a place for for all of them. We’ve got enough people helping that we think we can do them all in one weekend,” she told the hospital. ” And they were like, ‘What? No,’ they couldn’t believe it.”

It came on 50-yard rolls, so an attorney used his office’s paper cutters to slice it into thousands of 11-inch-long strips. Lepone says she doesn’t know how he heard about the project, but he ended up working all night.

“It was a true community community effort and I was floored by how the word got out and how many people wanted to help,” she said. “So it’s really it was really exciting.”

Everyone wore masks and gloves while they worked to limit any potential contamination.
The N95s went out to the volunteers on Friday and 20,000 of the repaired masks were back at Lepone’s house by Monday, she said.

The boxes were stacked up almost to the ceiling of her office until the hospital picked them up on Tuesday.

The volunteers are finishing up about 5,000 remaining masks, which should be ready later this week.
A hospital spokeswoman told CNN that the masks had been purchased to prepare during previous SARS and Ebola events and had been in storage for years.

She said that the masks were still in good shape and would be given to patients and visitors at Baptist Memorial to protect them and hospital staff from exposure to the virus.

“I mean, there’s such a need, they’re running out of masks,” Lepone said “So it was exciting to be able to help. It just snowballed into this huge effort and if it happened so quickly, I’m still trying to process everything.”

Lepone said they made spreadsheets and Google documents to keep track of all the volunteers and supplies. She hopes they can all have a big barbecue together once it’s safe to be in be in big groups.

Web articles – via partners/network co-ordinators. This website and its contents are the exclusive property of ANGA Media Corporation . We appreciate your feedback and respond to every request. Please fill in the form or send us email to: [email protected]
Previous: Bernanke Doesn’t See V-Shaped US Recovery After Steep Fall, Report
Next: Amazon testing disinfectant fog to keep workers on the job, Report