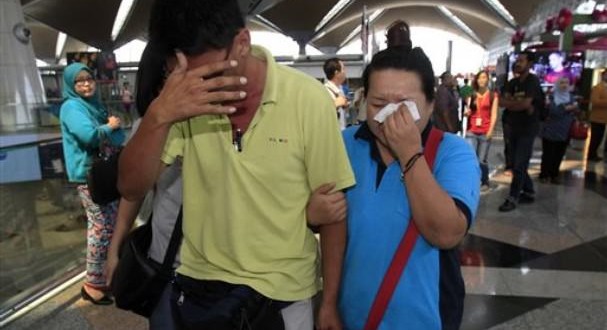 The crews of Vietnamese air force planes spotted two large oil slicks Saturday in the area where a Malaysia Airlines Boeing 777 with 239 people aboard vanished.

A Vietnamese government statement said the slicks were spotted off the southern tip of Vietnam.

Flight MH370 fell off radar screens less than an hour after it took off from Kuala Lumpur for Beijing.

Citing the head of Vietnam’s Civil Aviation Administration, The New York Times says the discovery could be the first hint of the plane’s location. According to the newspaper, the official, Lai Xuan Thanh, said one oil slick is 12 miles long.

The military planes are part of an intense international search for a Malaysia Airlines flight that had 227 passengers and 12 crew members aboard when it went missing after taking off from Kuala Lumpur early Saturday on a flight bound for Beijing.

Into Saturday night in Asia, the search focused on waters between Malaysia and Vietnam, where contact was last made with the jet, a Boeing 777. The search effort will include the U.S. Navy, which is sending a ship and a plane to help.

The U.S. State Department has confirmed that at least three U.S. citizens were on board the flight. After the passenger manifest was released Saturday, reports emerged from Italy and Austria that two names on the list belong to people whose passports had been stolen in recent years.

Meanwhile, an Austrian and an Italian thought to have been on the plane had their passports stolen and are safe, officials and family members said.

“We contacted the person to whom the passport belonged. This person is in Austria and safe and sound. His passport was stolen in 2012 on a trip to Thailand,” Austrian foreign ministry spokesman Martin Weiss told the AFP news agency.

Family members of an Italian man also listed onboard reported that he had contacted them to tell him he was safe, after hearing reports that an Italian with his name was among the 227 missing passengers. His passport was stolen last August, also in Thailand.

The airline said the plane was carrying 239 people, including 12 crew members and two infants. There were at least 14 nationalities onboard.

Web articles – via partners/network co-ordinators. This website and its contents are the exclusive property of ANGA Media Corporation . We appreciate your feedback and respond to every request. Please fill in the form or send us email to: [email protected]
Previous: Actress Jenna Fischer Flaunts Big Baby Bump on 40th Birthday! (Photo)
Next: Cate Blanchett displays her “Lord of the Rings” elf ears on her mantle