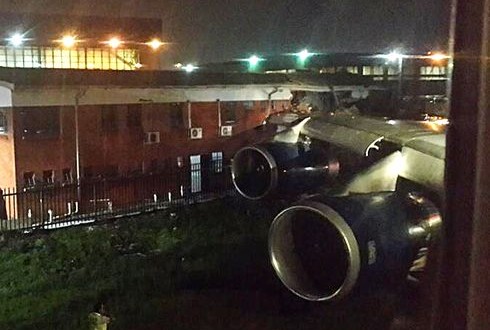 A British Airways jumbo jet carrying 202 passengers and crew sliced into an office building at Johannesburg’s main airport after following the wrong taxiway prior to takeoff for London, injuring four people on the ground.

The Boeing Co. 747-400, with a wingspan of 64 metres, had been instructed to use taxiway B but followed the narrower taxiway M, causing it to hit the offices, where the injuries were caused by debris from the building, South Africa’s Civil Aviation Authority said in a statement today.

The incident left the London-bound passengers stranded, with some saying they still don’t know what’s going on.

But British Airways says it has sufficient space on its flights departing from Johannesburg today for all of the passengers.

It says most passengers were bussed to hotels late last night and are being taken care of today.

But one passenger says there’s been very little correspondence about the crash.

“No communications, there’s a total lack of it. They haven’t told us what’s going on.”

Two men also told Eyewitness News that the crew on board the plane seemed panicked and confused after the incident.

They said they also couldn’t hear what the crew was announcing over the “very old” aircraft’s PA system.

The airline says it will be cooperating with an independent investigation by the SA Civil Aviation Authority and it’s also launched its own probe.

Web articles – via partners/network co-ordinators. This website and its contents are the exclusive property of ANGA Media Corporation . We appreciate your feedback and respond to every request. Please fill in the form or send us email to: [email protected]
Previous: Amanda Bynes Steps Out With Long Blonde Locks
Next: Priyanka Chopra voted Hottest Woman of 2013 (PHOTO)